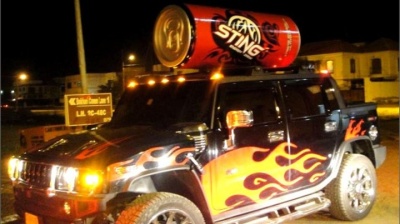 The World Bank arrived in a slightly more sedate vehicle.
By Kanat Shaku in Almaty January 30, 2020

World Bank economists are providing policy recommendations to Kazakhstan on introducing taxes on sugary drinks. Officials are working on countering the growth of health problems including diabetes, obesity and cardiovascular disease typically related to too much sugar consumption.

Economists from the international financial institution met with Kazakh government representatives on January 29. They discussed what impact taxes on sugary drinks would have in the country, the World Bank said in a statement.

Consumption of sugary drinks is increasingly prevalent in Kazakhstan, particularly when it comes to energy drinks. The trend is seen as draining badly needed resources from the country’s economy due to the expenditures required to combat the development of the wide range of health issues linked to excessive sugar intake. The wider incidence of related diseases lead to both lost productivity and avoidable healthcare costs. The new National Health Strategy 2020-2025 states that the current damage caused by non-communicable diseases to the economy of Kazakhstan costs KZT2.3tn (€5.52bn) per annum, equivalent to 4.5% of annual GDP in 2017.

‘Wins for health and economy’

“Introducing a tax on sugary drinks is a win for public health, and a win for the economy,” said Kate Mandeville, World Bank senior health specialist. “A simulation of the impact of this tax in Kazakhstan, under various designs, shows that it could generate up to KZT 182 billion (0.25% of GDP) by 2022, as well as reduce consumption in line with other countries.”

“The designs of the taxes vary, but global evidence shows preferences for specific excise taxes based on the volume of sugar content in these drinks. Both alternatives were selected by the World Bank team to analyze the policy options for Kazakhstan,” the statement said. “The success of these policies would depend on the implementation of the digital registration and control stamp system, as well as strong regulation of sugary drinks labelling.”

New coronavirus cases decline across emerging Europe but the epidemic’s not over yet
Borealis pulls out of $6.8bn plan to build petrochemical plant in Kazakhstan
Business rallies to help in fight against coronavirus across Eastern Europe and Central Asia