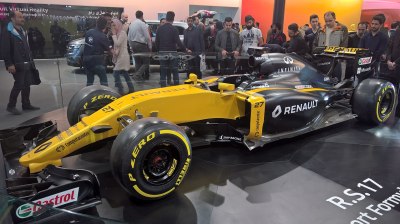 Renault made a big effort when the Tehran Auto Show was relaunched in 2017. Not so this year.
By bne IntelliNews January 8, 2019

The third edition of the Tehran Auto Show has failed to attract any of the world’s big carmakers, according to Iranian website coverage of the January 8-11 event.

The annual showcase made a comeback after a hiatus brought about by the international sanctions that existed before the introduction of the Iran nuclear deal in January 2016. Now it looks like the sanctions regime imposed last year by the US has undermined the relaunched event.

According to local automotive website Asbe Bokhar (Horse Power), the 2019 edition of the Tehran Auto Show did not feature many of its usual exhibitors including Citroen, Renault and China’s Chery, some of the most popular auto brands in Iran.

World-renowned automakers last year pulled out of Iran fearing that if they stayed they would be hit by secondary sanctions threatened by the US when it comes to foreign companies that continue doing business with the country despite Washington’s warnings.

Big Iranian carmakers Iran Khodro (IKCO) and SAIPA, both of which have sanctions-hit deals with PSA Groupe’s Peugeot and Citroen brands, were present at the show. However, only one new model—a mid-sized sedan named Roham—was presented by SAIPA.

Several large Chinese brands decided not to exhibit vehicles at the show. They included Chery, which has a joint venture with local automotive group ModIran Vehicle Manufacturing (MVM). Chery recently announced it would be offering a new vehicle, a medium-sized sedan—but due to the ever-increasing prices of foreign cars amid the sanctions-hit Iranian economy, the company has backed off from introducing the vehicle.

Other potential suppliers to the Iranian auto market including Russian brand UAZ also failed to appear at the car show this year, meaning none of UAZ’s Patriot models were presented to the Iranian public. UAZ’s local partner has removed its website.

Auto production in Iran has taken a heavy hit since the summer with a previously released report suggesting that in the nine months to December 21 Iran’s auto production dropped 31% y/y with 713,233 car produced in the period, compared with 1.03mn vehicles in the year before.

As reported by the Iranian Ministry of Industry Mining and Trade, in the third quarter of the Persian calendar year, car production fell more than 57% y/y, from 391,801 to 167,907 vehicles.