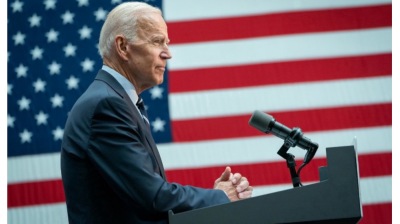 US president Joe Biden asked Congress for $33bn in military and humanitarian aid for Ukraine – a tenfold increase on previous aid – stoking talk that the US is stepping up fighting a proxy war against Russia in Ukraine.
By bne IntelliNews April 29, 2022

US President Joe Biden asked Congress on April 28 to approve a massive $33bn for new funding for Ukraine, two thirds of which will be spent on weapons. On the same day lawmakers in Germany voted overwhelmingly to send Ukraine heavy weapons, an about face on Berlin’s earlier reluctance to arm Ukraine with serious weapons in its fight with Russia.

The US package is the latest in a string of allocations for Ukraine but is an order of magnitude bigger than the previous commitments. In the last two weeks Biden has announced two packages of $800mn of help, mostly weapons, for Ukraine, using up the last of the funds that he can earmark without Congresses approval. The second of the two packages included 72 howitzers and ammo that represented a scaling up to heavy arms to supply the Ukrainian army that is now in an existential fight for control of the Donbas, but reportedly is already running low on supplies.

The US largesse brings its commitment to Ukraine up to around $4bn of aid this year, of which $1.6bn has been committed in the last two weeks. The new request to Congress takes the US commitment to Ukraine to a new level and shows a determination to prevent Ukraine from losing its expanding war against Russia.

The Russians have been complaining bitterly that increasingly it is fighting a proxy war against the US and have warned Washington in an acid diplomatic note not to interfere in its “special military operation” in Ukraine.

Any country trying to intervene in the Ukraine war will face a "lightning-fast" response, Russian President Vladimir Putin has warned. "We have all the tools no-one can boast of... we will use them if necessary", he said, in what was widely interpreted as a reference to ballistic missiles and nuclear arms.

The Kremlin said Russia had been forced into the action by the "unfriendly steps" of Western nations. Previously the Kremlin warned that any Nato transports found in Ukraine transporting weapons would be seen as “legitimate military targets.”

The support by the West started accelerating after a massacre in Kyiv’s suburb of Bucha on April 3, where retreating Russian soldiers murdered a reported 350 civilians in cold blood.

The Kremlin denied responsibility, and repeated its claims that the scene was staged by Kyiv as a provocation to UN Secretary-General António Guterres, who was in Moscow two days ago calling for a humanitarian corridor to be set up to allow civilians to leave the besieged city of Mariupol.

On the same day lawmakers in Berlin gave the green light to send "heavy weapons and complex systems" to Ukraine. Ukraine has chided Germany for not supplying weapons and is asking for tanks in particular. The government replied that it is not allowed to send offensive weapons into a “conflict zone” by law, a legacy of legislation on the books since the end of WWII. The decision to send Ukraine heavy weapons now is a historical change of policy for Berlin that remains very uncomfortable in participating in any war. The decision passed with 586 votes in favour, 100 against, and seven abstentions.

This week German metallurgy conglomerate Rheinmetall formally asked the government for permission to ship some 80 Leopard tanks to Ukraine, but has been rebuffed several times by German Chancellor Olaf Scholz, who has said that his main concern has been to avoid starting WWIII.

The step up in US spending will only fuel growing concerns that the Ukraine conflict is escalating into a classic Cold War-era style proxy war between Russia and the US.

The new US commitment is five times larger than the entire Ukrainian defence budget of $5.9bn and equivalent to half Russia’s annual defence budget of $65.9bn in 2021, which is already one of the top ten biggest expenditures on defence in the world.

The proposal includes more than $20bn in new military and security assistance, including new authority to quickly transfer weapons to Ukraine from the US inventories. There is also billions in economic and humanitarian aid as part of the package. Biden told Congress that it is “critical this funding gets approved and approved as quickly as possible.”

The new funding will begin “the transition to longer-term security assistance that’s going to help Ukraine continue to defend against Russian aggression,” Biden said. “The cost of this fight is not cheap. But caving to aggression is going to be more costly if we allow it to happen. We either back [the] Ukrainian people as they defend their country, or we stand by as the Russians continue their atrocities and aggression in Ukraine.”

Biden’s request is likely to have near-unanimous support among members of both parties, reports Politico.

However, there may be problems with rapid approval as Democrat leaders said they would pair the request with the president’s separate request for new COVID relief funding – a move that Republicans have said would doom both packages. Despite the GOP warnings, Biden in his letter to Congress on Thursday, 29 April specifically asked lawmakers to pair the two funding requests, Politico reports.