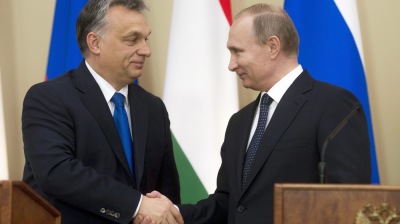 Russian President Vladimir Putin was in Hungary to meet with Prime Minister Viktor Orban to talk gas and trade
By bne IntelliNews October 31, 2019

Russian President Vladimir Putin arrived in Hungary for a working visit on October 30 that is expected to focus on energy although the Kremlin said ahead of the meeting that talks would cover the “full range of issues of Russian-Hungarian interaction”.

"During the talks, the parties are to discuss the, first and foremost, in the commercial and economic and cultural and humanitarian sectors, as well as to exchange views on a number of relevant international and regional matters," the Kremlin’s press service said before the trip.

Despite the sanctions imposed by the EU and other Western nations over Russia’s annexation of the Crimea, Putin and Hungarian Prime Minister Viktor Orban have met at least once a year in the last five years.

Hungary’s illiberal prime minister — who like Putin has criticised the “liberal values” espoused by the EU — has pushed for fellow EU members to ease sanctions on Russia.

After talks with Putin, Orban defended his ties with Russia and said that Hungary aimed to “take a step forward every year in political and economic relations” with Moscow, according to newswire reports.

Orban also talked of Hungary’s position in a regional context “in the triangle between Moscow, Berlin and Istanbul” — with no mention of Brussels.

“Hungarian policies are aimed at Hungarian success and good relations with those countries that play a decisive role for us in this region,” he said.

"It's a simple geographical fact: No country can change its address.”

According to a statement from the Kremlin, a package of agreements was signed after the meeting between the two leaders, including a “plan of measures on implementing a comprehensive programme of Russian-Hungarian interregional cooperation and a treaty between the Russian Federation and Hungary on social security”.

In the energy sector, which has been an important part of Hungarian-Russian cooperation, the two sides signed several agreements on cooperation between Russian oil companies Lukoil and Transneft and Hungary’s MOL Group. Implementing these agreements will make it possible to increase Russian fuel exports to Hungary via the Druzhba (Friendship) pipeline until 2025, Putin said following the talks.

According to Reuters, the two sides signed the first major settlement deal for contaminated Russian oil supplies shipped through the pipeline to Central Europe earlier this year. Transneft has promised to compensate refiners in the region.

The talks covered the Turkish Stream pipeline that will bring Russian gas from Turkey via Southeast Europe to Central Europe, bypassing Ukraine that is going on line now. Hungary is due to be connected to the pipeline once the infrastructure across Bulgaria and Serbia is completed, and Orban said following the meeting that he hoped Hungary would be connected “as soon as possible”.

Putin said after the meeting that while the two countries are trying to diversify their relations — overall bilateral trade reached around $7bn last year, up 30%, according to Russian statistics — energy remains the most important area for cooperation.

"Of course, energy is the most important thing because Russia meets 60% of Hungary’s requirements in oil and 50% in natural gas. However, the prime minister said today that according to Hungarian statistics, in reality this is more than 50%,” the Russian president said.

Aside from their cooperation in the hydrocarbons sector, Russia’s state-owned Rosatom is already expanding Hungary’s Paks nuclear power with the addition of two new blocks. The largest ever investment in Hungary would increase capacity by 2,400MW. Russia is financing €10bn of the €12.5bn project, which is currently running behind schedule.

Meanwhile, Hungary’s Foreign Minister Peter Szijjarto said that Budapest had vetoed a joint declaration by Nato ambassadors on Ukraine over the issue of the Hungarian minority in Ukraine.

Szijjarto said that Budapest is not willing to sacrifice the interests of the 150,000 ethnic Hungarians living in western Ukraine to geopolitical interests, local media reported.