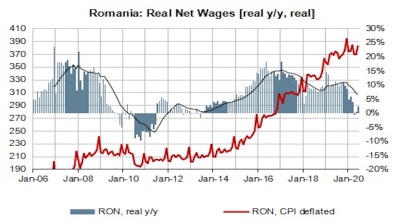 The net wages returned to positive real growth rates in May after they marked the first negative performance (-0.5%), in April, after more than seven years.

Employment indeed decreased as an effect of subdued activity during the lockdown and afterward, but the annual contraction was only 1.7% as of May 2020 (latest data available). Overall, the households’ aggregate earnings from wages remained steady in real terms, and this was seen in the stronger-than-expected recovery of the retail sales (+2.9% year-on-year in June).

In June, wages decreased significantly (by one third) in the air transport industry — not surprisingly given the previous lack of activity, and surged robustly (by over 14% year-on-year) in the tobacco industry, which is particularly resilient to any crisis.

In the automobile production industry, wages contracted by 5.3% y/y as activity had not resumed at full speed in June. Salaries in the food and beverage industry increased by 8-10%, driven by robust demand.