VISEGRAD: Chinese investments in Czech Republic – a new gateway to Europe or just a shopping spree? 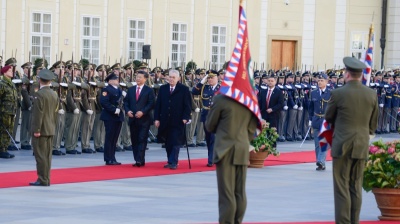 State visit of Xi Jinping to Czech Republic on March 28-30. / Photo by CC
By Alice Rezkova of Association for International Affairs May 31, 2016

As was elucidated at a May 25 breakfast panel discussion hosted by the CFA Society Czech Republic in Prague, the Czech approach towards China has been a bit peculiar, veering from extreme hostility to extreme servility. The relationship has grown from almost zero to billions of euros in investments in just a few years and frequent high-level visits. The Czech government would like to play the leading role in China’s New Silk Road initiative –  a project to reconnect China with Eurasia and Europe by building huge infrastructure – and the 16+1 bloc paving the way for the Chinese to invest into the region. Achieving these goals will require quite some diplomatic manoeuvring, as the Czechs already missed the opportunity to become a permanent member of the Asia Infrastructure Investment Bank and lag behind other 16+1 countries in both Chinese investment and trade. In addition to the overly flattering policy practised by the Czech president, enhanced cooperation in business seems to be the right way in becoming a serious candidate for the “gateway to Europe” status.

Chinese companies are not mysterious enigmas and no special code is needed to read their investment intentions in the region. Consistent with their activities in the EU, they snap up stakes mainly in companies in energy, finance, logistics and real estate; only the ratio changes depending on resources and opportunities available in any given country. The Czech Republic is no exception. The Chinese investment group CEFC has already bought a 50% stake in J&T Finance Group, a 50% share in Travel Service airline and acquired representative premises in downtown Prague.

So what will be next steps for the Chinese in the Czech Republic?

When the first investment tide into the aforementioned usual suspects goes out, Chinese companies tend to focus on finding niche industries with sizeable comparative advantage, be it ICT in Israel, the chemical industry in Hungary or agriculture in Ukraine. In the Czech Republic it could be any industry that produces world-class innovation in fields encouraged by the Chinese government. Today, high-tech producers in aviation, bio-medicine, nanotechnology, ICT or environment protection enjoy significant Czech governmental support in the form of tax deductions and other incentives. Nevertheless, true Czech innovators, who are still a rare species, are wary of Chinese courtship: better, they think, to come up with a viable commercial application and succeed in the Western world first, before start swimming in the murky Chinese waters.

Overall, Chinese companies are on a record-breaking shopping spree all around the world and the Czech Republic is just a small drop in this ocean. China Global Investment Tracker developed by the American Enterprise Institute shows 2015 global Chinese investment growing by 16% to $111bn. However, many of the announced deals still need to be approved by regulators; particularly in the US, some promising Chinese transactions have been vetoed by the Committee on Foreign Investment. So far this has not been the practice in the EU, and certainly not in the Czech Republic, which is intensely looking for new ways to cooperate with the Chinese. Furthermore, it is becoming more and more difficult for Chinese companies to get money out of their own country, as the government there is desperately trying to control the flows of cash leaving.

Considering all the practical obstacles, will Czechs be able to offer enough interesting investment incentives when capital is now quite easily available for any reasonable business plan?

Chinese companies are clearly no longer interested in ‘peanut projects’, rather they are eyeing big investment and infrastructure cooperation. Most Chinese enterprises use global expansion as a shortcut to acquisition of new business and technical skills. This knowledge can be acquired either through a Czech company with specific technological know-how that is scarce or through large-scale projects. The Chinese position in infrastructure development did not work out in Poland, so could the Czech Republic offer an alternative? The expansion of the nuclear power plant Temelín is probably the biggest golden egg for the Chinese, but is their participation an enforceable option politically? Could J&T and CEFC overcome regulatory concerns and jointly bid for GE Money Bank, which in May sold 51% in an IPO, thus creating a big retail bank holding in the region?

Clearly, the capacity of the Czech Republic to become the desired Chinese bridge to Europe has its limits. Even though “interesting times” can be expected from Chinese activities in Central Europe, more Chinese business delegations visiting and new investments on the way, the Czechs should not buy into the hype too much, as the current shopping spree will undoubtedly end sooner or later end.