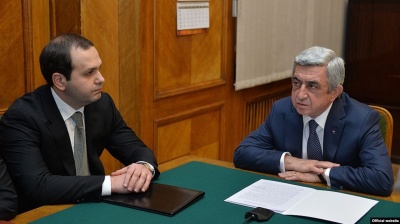 The recent violent death of Georgi Kutoyan, a former chief of Armenia’s national security service, “has thrown back into public view the wide fissures and deep animosities in Armenian politics” and is a “troubling development” for the country, according to Paul Stronski, a senior fellow in think tank Carnegie Endowment for International Peace’s Russia and Eurasia Program.

“Found by his wife with a gunshot wound to his head, the thirty-eight-year old former security chief was once a rising star,” wrote Stronski in a commentary. “Starting as an aide to former Armenian president Serzh Sargsyan, he rose to head the Armenian national security service until 2018, when the Armenian Velvet Revolution and subsequent swift collapse of Sargsyan’s government derailed his career.”

After learning of Kutoyan’s death, some allies of the former government rushed to claim foul play. Prime Minister Nikol Pashinian unceremoniously fired Kutoyan in 2018. “In the eyes of the old regime, Pashinyan’s government is vindictive and unlikely to conduct a transparent investigation. This rush to judgment highlights the opposition’s lack of trust in the government—a long-standing problem, no matter who is running the country,” Stronski added.

“Meanwhile, Armenian law enforcement initially claimed that Kutoyan took his own life. In a twist, however, investigators now wonder whether someone drove Kutoyan to kill himself. To make the case more puzzling, the apartment where Kutyoyan’s body was found was riddled with bullets. Law enforcement has a tough job ahead to determine what happened in a way that instills trust in the process,” he said.

Kutoyan was not known to be under investigation by the Pashinian government. “His death, however, occurred in a political context where former government officials struggle to reinvent themselves in the new Armenia and often find themselves under pressure by investigators, even if they are not formal targets for indictment,” noted Stronski.

Former police chief Hayk Harutyunyan last September reportedly also killed himself, again with a self-inflicted gunshot to the head. Harutyunyan headed the police during the violent 2008 crackdown against the opposition, believed to have been ordered by then-president Robert Kocharyan. “Harutyunyan was not indicted for his involvement in those events, unlike Kocharyan and several others. But before his death, Harutyunyan complained he was being pressured to provide false testimony against Kocharyan,” Stronski said.

He concluded: “Over the past year, thugs have roughed up members of the former government, as well as liberal supporters of the new regime. Pressuring and outright beating up one’s political opponents is not new in Armenia; Kocharyan allies in September reportedly harassed the judge presiding over his trial. The country has a sad history of political violence. But the continuation of political violence in the Pashinyan era is troubling, as the Prime Minister admits.

“Troubling habits of the past linger in other ways too. Law enforcement at times still seems politically motivated. The Pashinyan government has failed to articulate a clear rationale for how it decides whom to target for prosecution from the old system. While prosecutors have gone after Kocharyan with a vengeance, former president Sargsyan remained unscathed for over 18 months until he was indicted for embezzlement in December 2019.

“Yet, Gagik Tsarukyan, Armenia’s richest oligarch, who leads parliament’s second biggest faction and threw his weight behind Pashinyan during the Velvet Revolution, remains untouched. Prosecutors reportedly charged former defense minister Vigen Sargsyan on vague corruption charges in late September 2019, only to drop the case mysteriously a few weeks later. These inconsistencies raise questions about the Pashinyan’s government’s commitment to conduct transparent non-politicized investigations. So do accusations of government pressure on judges in some of these cases.”