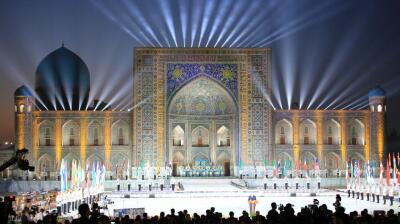 Uzbekistan is bouncing back from last year's crisis strongly. The World Bank has increased its growth forecast to 6.2% for this year from 4.1% previously. / wiki
By Ben Aris in Berlin October 13, 2021

As one of the only two major economies in the world to avoid recession last year, the Uzbek economy is bouncing back from last year’s coronacrisis crisis strongly. The World Bank has upped its GDP forecast to 6.2% this year from 4.1% previously, and to 5.8% in 2022.

The country was hurt like everyone else as so much of the global economy shut down for months during the worst of the coronavirus (COVID-19) pandemic. With a young population and a diversifying economy, Uzbekistan has been flourishing in recent years since Uzbek President Shavkat Mirziyoyev started to open up to the rest of the world and lift restrictions on private business imposed by his predecessor Islam Karimov, who died in 2016.

Most of the main macroeconomic indicators are doing well. After slowing to 1.7% last year, Uzbekistan's GDP rose to 6.2% in the first half of this year. Economic growth was fuelled by increased household incomes and domestic investment, anti-crisis measures and tax breaks, the World Bank says.

Inflation, a problem for all countries this year, has also been taken in hand and fell from 14.7% in June last year to 11% in June this year. The indicator remained double-digit due to the outstripping growth in food prices, the World Bank said in its report.

The Uzbek retail market is becoming increasingly attractive and the supermarket sector in particular has been singled out as “ready to boom” following its peers, where the introduction of organised retail has led to a rapid development of the sector.

The sector has attracted tens of millions of dollars in foreign investment, according to the Financial Times. The European Bank of Reconstruction and Development (EBRD) has also invested some $40mn to take a stake in Korzinka, one of the biggest supermarket chains, while big French grocer Carrefour became the first international retailer to enter the Uzbek market last year, intending to invest $100m.

Korzinka, which accounts for half of all supermarket turnover in the country, anticipates expanding its chain from 68 to 150 stores by 2025. Carrefour has opened three stores, and a further four to six are planned for this year alone. The biggest expansion is expected from Makro, Uzbekistan’s current leader by the number of stores, with 109 mainly supermarkets and express shops. Makro plans to have between 800 and 1,000 stores in the next five years, according to its chief executive, Roman Sayfulin.

Other international retailers to tap the Uzbek market last year included Russian discounter Fix Price, and Belarus’ Baraka Market, which plans to have 400 small supermarkets in the country by the year-end.

To maintain the country’s fast “catch up” growth the government needs to stick to its frenetic reform agenda. Uzbekistan's GDP growth is forecast to reach 6.2% in 2021, facilitated by a recovery in domestic investment, international trade and remittances – all of which remain vulnerable to the risks of the coronavirus pandemic resurging.

The World Bank experts remain optimistic and expect the country's GDP growth rate to remain strong in 2022, reaching 5.6%, as the pace of vaccination of the population accelerates and the disruptions in the global economy decrease.

But the biggest difference can be made by the ongoing reforms and investments they attract. Despite being in office for five years, the country has barely left square one in the president’s effort to transform it into a modern market economy. The World Bank says that it expects foreign direct investment (FDI) to stay at a low level this year, but it will partially recover next year.

In the meantime, the state is pushing ahead with its privatisation programme and restructuring of the state-owned enterprises (SOEs) to bring in more investment.

The banking and energy sector reforms are the most advanced and in a sign of things to come, both have already attracted significant foreign investment. Two banks have already been sold, the most recent being mortgage specialist Ipoteka bank to the Hungarian OTP. And Georgia’s TBC Bank has also entered the market, which is three times the size of its own domestic market back home.

The organisation of the energy market has already been transformed and with the help of the European Bank for Reconstruction and Development (EBRD) and other international financial institutions (IFIs) foreign investment has been attracted into modernising the existing facilities as well as building new renewable energy production capacity. In October the Uzbek government announced it is set to take its first corporate loan from the EBRD to invest into two wind farms.

All this costs money and the expansion of social support for the population, state investment in the development of rural infrastructure, as well as the costs of the vaccination campaign for the population and on the agenda and will further increase public spending by the end of the year. The World Bank has said these costs will be partially offset by higher tax revenues to the budget and revenues from mining as well as revenues earned from the ongoing privatisation of SOEs.

Sustained economic recovery, gradual elimination of anti-crisis measures and tax administration reforms aimed at expanding the tax base are expected to help reduce the budget deficit and stabilise public debt at about 42% of GDP by the end of 2023, the World Bank says.

Global inflation refuses to be tamed and with price increase in the US hitting 8.6% in May, its highest level in 40 years, the Fed is expected to start tightening monetary policy by hiking rates that will suck liquidity out of Emerging Markets.

Stagflation fears continue to rise
1 hour ago
The economics of herding in Mongolia
1 day ago
EXPLAINER: how a price cap on Russian oil might work
1 day ago
Russia catches a nasty dose of the Dutch Disease
2 days ago
Sky-high inflation forces more Russians to take out “pay-day” loans
5 days ago