Uzbek central bank to lift all limits on exchange fluctuations 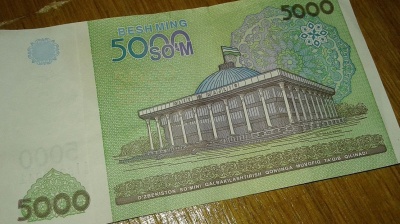 The Uzbek sum has left the corridor.
By Kanat Shaku in Almaty. August 22, 2019

The Central Bank of Uzbekistan is to no longer set limits on exchange rate fluctuations, thus completely removing the floating exchange rate corridor, the regulator’s chairman Mamarizo Nurmuratov was quoted as saying on state television this week.

Previously, the central bank said on August 9 it would switch to a “wider” floating exchange rate corridor for the purpose of currency interventions, but the measure appears to have been insufficient.

The latest decision cames as a response to an acceleration in the weakening of the Uzbek sum (UZS) against the dollar since the second half of July. That depreciation has been partly driven by inflation experienced by the ex-Soviet state’s main trading partners, including Russia, Kazakhstan and China since the second half of last month. Domestic factors at play include rising foreign currency demand from Uzbek importers, which is a side effect of the government’s reform-drive to open up the country.

“The central bank decided yesterday to cancel the five-percent limit on ....exchange rate movements,” Nurmuratov said. “The rate will now be determined by the buyers and sellers.”

The rate has constantly weakened since the lifting of currency controls in September 2017 abolished the dual exchange rate regime in the country, which largely kept the circulation of foreign currencies within the black market. The dual exchange rate long hurt foreign investment in Uzbekistan and fed double-digit inflation, which remained hidden behind the unofficial dual mechanism.

Record-breaking investment
In mid-August, Uzbek President Shavkat Mirziyoyev said that the share of investment in Uzbekistan’s GDP has exceeded 38% for the first time in the country’s history. For comparison, he said this figure stood below 25% last year.

Whether accurate or not, the announced figures are meant to showcase that Uzbekistan’s reforms, aimed at opening the country foreign investors, are indeed working. GDP growth stood at 5.8% in the first half of 2019—prior to Mirziyoyev taking power in late 2017, Uzbekistan used to report inflated growth figures that never fell below 7%.

“Over the past year, the share of industry in gross domestic product has grown from 26% to 30%, but this still does not correspond to the scale of the reforms we started,” Mirziyoyev said.