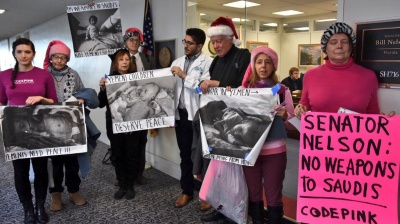 In announcing its latest Iran sanctions the US hit out at the Iranians for supplying weapons to rebels that contribute to Yemen's humanitarian crisis. However, activists regularly point out US and UK weapons supplied to the Saudis have a rather big role in that crisis.
By bne IntelliNews December 11, 2019

The US on December 11 announced new sanctions against Iran with the latest targeting an Iranian shipping network that is allegedly smuggling "lethal aid" to conflict-torn Yemen and three agents of Iranian airline Mahan Air.

The announcement came only hours after Iranian President Hassan Rouhani reiterated in a speech that Iran would overcome US sanctions either by bypassing them or through tolerable negotiations, according to ISNA. However, there is speculation in Tehran that, while Iran remains under the cosh and seemingly resolute in its determination not to budge from its position that it will not enter negotiations with the US unless Washington ceases its sanctions-led “economic war”, some behind-the-scenes diplomatic efforts to address the impasse are under way involving the Japanese, Omanis and a network of back-channel intermediaries. Those contending that this scenario is real were backed up in recent days after secret negotiations between Iran and the US led to a prisoner exchange.

"The government is determined to defeat [the enemy] by bypassing America's sanctions ... or through various means including talks, but we will not cross our red lines," Rouhani was quoted as telling his weekly cabinet meeting.

Iran has previously accused the Saudis, armed to the teeth with US and UK supplied weapons, of causing the humanitarian crisis in Yemen by taking a brutal role in the four-year-old Yemeni Civil War.

The targeted shipping network is run by the Islamic Republic of Iran Shipping Lines and E-Sail Shipping Company.  The shipping companies were designated for terrorism or support for terrorism, while the Mahan Air agents were named under a designation that targets entities connected to the proliferation of weapons of mass destruction or their means of delivery, including missiles.

Iran's missile programme has become a growing source of anxiety in recent weeks, both in the US and Europe. The Pentagon is considering sending 4,000 to 7,000 additional troops to the Middle East as part of an effort to beef up air defence capabilities in the face of Iranian moves that include its recent transfer of short-range missiles into Iraq, CNN has reported.

There is concern the Iranian missiles could pose a threat to US forces in Iraq and potentially be moved to threaten Saudi Arabia as well.

France, Germany and the UK have alleged in a joint letter released by the UN in early December that Iran has developed nuclear-capable ballistic missiles and "continues its proliferation of ballistic missile technology in the region." Iran's Foreign Minister Mohammad Javad Zarif has called the charge a "desperate falsehood to cover up their miserable incompetence in fulfilling bare minimum of their own JCPOA obligations." The Joint Comprehensive Plan of Action, or JCPOA, is the formal name of the 2015 nuclear deal aimed at keeping Iran’s nuclear programme purely civilian in nature. It does not cover the development of ballistic missiles.

Last month, the US government seized weapons smuggled on a small boat destined for Yemen, where Iran supports the Houthi rebels.

A special envoy from Japan was on December 11 in Tehran to prepare the grounds for Rouhani's planned December 19 visit to Tokyo for talks with Japanese Prime Minister Shinzo Abe. Rouhani’s chief of staff has said the visit will be "just a bilateral one".

Meanwhile, with some anxiety in the air that Iran plans to replace the world wide web with a domestic intranet, or ‘halal web’, Rouhani commented on the implementation of the country’s intranet, officially called the National Information Network (NIN). It would be provided in parallel with the “foreign internet”, IRNA quoted him as saying. He was also cited as saying the government wants people to enjoy the use of the global internet along with a strong domestic counterpart.