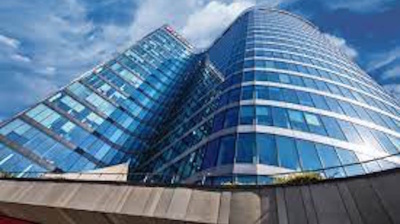 UniCredit is one of the top three foreign banks in Russia. / Wikipedia
By Robert Anderson in Prague March 16, 2022

UniCredit, one of the three biggest foreign banks in Russia by assets, is considering withdrawing from the country following Moscow’s invasion of Ukraine.

The Italian lender’s chief executive Andrea Orcel said it was his personal preference to leave Russia but this was not a decision the bank could take quickly or lightly.

“It would be quite easy for me to say that we’re leaving Russia — it is what we all want to do, and it is what our minds and bodies demand,” Orcel told the Morgan Stanley European Financials Conference on Tuesday, in remarks reported by the Financial Times. “However, UniCredit has about 4,000 people in Russia. We cover 1,500 corporates, of which 1,250 are Europeans that are trying to disentangle themselves from the country.”

The bank warned last week it faced losses of more than €7.4bn in an “extreme scenario” whereby its entire Russian business was wiped out.

All banks in Russia face huge problems following the imposition of Western sanctions, the collapse in the value of the ruble, and the country’s looming economic crisis.

According to the Bank of International Settlements, which suspended Russia’s membership last week, Italian and French banks have the largest Russian exposure, representing just over $25bn each at the end of September, followed by Austrian banks with $17.5bn. US bank exposure totals $14.7bn, BIS data shows.

RBI, which claims to be the largest foreign bank in Russia by assets, was reported by Reuters earlier this month to also be looking into leaving Russia. However, the Austrian lender has denied the report.

RBI claims a market share of 1.3% in Russia – slightly higher than its nearest competitors, UniCredit and France’s Societe Generale – putting it in tenth place.

RBI's overall Russian exposure totalled €22.85bn at the end of last year, more than half relating to the corporate private sector.

The other big European bank active in Russia, Societe Generale, owner of Rosbank, warned earlier this month it could potentially be stripped of its business in Russia, where it had €18.6bn of exposure at the end of last year.  The French lender has made no comment about a potential exit.

Referring to Societe Generale and UniCredit, Fitch said earlier this month: “Even a full write-off of the two banks' investments in their Russian subsidiaries in an extreme scenario would have a fairly moderate impact on capital at a group level. We estimate that Societe Generale's consolidated common equity Tier 1 ratio would fall by about 40bp and UniCredit's would fall by about 15bp.”

French bank Credit Agricole is also vulnerable, with an exposure of €6.7bn to Russia.

Citibank is the most exposed US bank at an estimated $10bn. It was already in the middle of trying to sell its consumer lending business, something that will now be even more difficult.

Investment banks JPMorgan, Goldman Sachs and Deutsche Bank have each announced in recent days they are winding down their operations in Russia.

The Kremlin has warned that it would confiscate the businesses of any investors quitting Russia and would keep them running.

Orcel said that UniCredit, the biggest cross-border bank in Central and Eastern Europe by assets, is now conducting an “urgent” review of how an exit would work.

“We are completing an urgent review on the country. And we are considering exit. But obviously, we need to seriously consider the impact consequences and the complexity of this untangling a full bank from the country,” Orcel said.

The lender last week said it had loans of about €7.8bn in its Russian consumer unit and net cross-border exposure to companies of €4.5bn, of which about 5% had been hit by Western sanctions after the invasion of Ukraine, the FT reported. UniCredit also revealed a net derivative exposure to Russian banks of about €300mn and said “the maximum potential loss in the event that the rouble would tend to zero is around €1bn”.

UniCredit had been examining an acquisition of Russian government-owned lender Otkritie before the invasion but has since scrapped those plans.