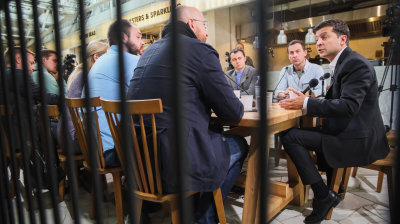 Ukraine’s President Volodymyr Zelenskiy rolled the dice and is gambling with the future of his presidency at the press conference marathon he called in a food hall in Kyiv that went on all day on October 10.

Investors and Ukraine’s donors were looking for clear statements on the future of PrivatBank that was nationalised in 2016 and confirmation that the new administration will uphold the independence of the central bank. What they got were prevarications.

Zelenskiy is going to protect the interests of the state over the snowballing PrivatBank crisis, however he favours attempts to find out "an amicable agreement" with the lender's former owner, controversial oligarch Ihor Kolomoisky, who is widely considered to be Zelenskiy's mentor and sponsor.

"We will see what the result is [of the litigation on the return of shares to ex-owners of the bank]. If the result is such that I need to protect the country, I will protect our state," news agency Interfax quoted Zelenskiy as saying on October 10.

Those comments pleased no one and did little to quell fears that the president intends to make some sort of concession to Kolomoisky’s demands. The oligarchs is attempting to have the nationalisation undone by court and a decision that was due on October 9, the day before Zelenskiy's press conference, was delayed until October 17. Kolomoisky also offered to settle the dispute and withdraw his lawsuits if the government pays him $2bn in compensation.

The issue of PrivatBank has become a red line for the International Monetary Fund (IMF) which delayed signing off on a new $3.2bn Extended Fund Facility at the end of September until there was some clarity from the new administration over the future of PrivatBank and a clear statement that the government would uphold the independence of the National Bank of Ukraine (NBU). The central bank has also complained about Kolomoisky, releasing a “Stop Terror” statement that was clearly aimed at the oligarch.

“Until [Zelenskiy] takes a clear stand in favour of the Ukrainian State & its citizens on Privatbank, neither the IMF nor big foreign investors will dare to inject substantial financing in Ukraine. Does [Zelenskiy] understand this? Is he too weak or is he just biding his time?” tweeted Anders Aslund, a well known Ukraine commentator and senior fellow at the Atlantic Council.

Zelenskiy's call to leave it to the courts will not inspire confidence either as the court system remains unreformed and deeply corrupt. Indeed, the Kyiv Economics Court, where the PrivatBank case is being heard, has already handed down a string of decisions in Kolomoisky’s favour undoing many of the agreements that Kolomoisky signed with the former governor of the NBU, Valeria Gontareva, who ordered PrivatBank to be nationalised.

“Those decisions are all from that totally corrupt court. None of it is real,” Gontareva told bne IntelliNews in an exclusive interview in June.

Analysts were scathing on Zelenskiy's comments, which if he intends to return the bank to Kolomoisky or compensate him, must be largely aimed at the domestic audience, where the president remains overwhelmingly popular. But as bne IntelliNews wrote in a recent op-ed, the honeymoon with foreign investors is already over.

“Pretty clear that Zelenskiy does not fully understand this issues or risks associated with the PrivatBank issue. This is the largest bank in the country and its de-nationalisation represents a huge threat to macro financial stability. He needs to wake up quick. This is bigger than his mate Kolomoisky,” Timothy Ash, senior analyst at Bluebay Asset Managers, said in a note to clients.

“His decision will set the course of his presidency. Either he is in the pockets of the oligarchs, or certain oligarchs, or he is truly representing the interests of the people. If he gets this wrong, PrivatBank, the largest bank in the country, might be declared insolvent, depositors will take fright and foreign portfolio investors will pull the $3.6bn invested. With no IMF backstop how will Ukraine cover a weight of foreign debt falling due? Where will his mate Kolomoisky be then? If he makes the right decision the successful macro stabilisation can continue with portfolio inflows, a stable UAH, rising FX reserves, falling interest rates, investment, growth and jobs. Only an idiot would chose the former over the latter path,” Ash added.

Earlier this week, PrivatBank's legal adviser Andriy Pozhydayev said that the Kyiv Economic Court scheduled debates on the case for October 17, after which it can announce its ruling. According to lawyers of the NBU, the court refused to open the debates to the public, citing the sensitive content of banking secrets being disclosed.

Given the crucial nature of the outcome of the case, journalists at the courthouse that were turned away at the start of the proceeding decried the decision as flying in the face to the freedom of the press and counter to the liberal anti-corruption platform that Zelenskiy campaigned on.

The court is studying the claim of Kolomoisky and Cypriot company Triantal Investments (both are former shareholders of the bank) to recognise as invalid a sales-purchase agreement between the former shareholders and the finance ministry concluded on December 21, 2016.

In April, the Kyiv Administrative Court ruled upon hearing an appeal by former co-owner of the bank Kolomoisky that the procedure whereby the state participated in resolving the insolvent PrivatBank was out of compliance with applicable laws.

The bail-in followed recognition of PrivatBank's insolvency and preceded its nationalisation in December 2016. The court ruling was based on a claim filed by its former key shareholder, Kolomoisky, and his related entity, Triantal Investments Ltd.

The decision granted former PrivatBank shareholders the ability to reclaim their funds that were bailed in during the nationalisation, the NBU stated, stressing that it was a first-tier court ruling and therefore doesn't take immediate effect. The NBU has promised to appeal the ruling.

"We need an agreement" with Kolomoisky

During his October 10 press conference Zelenskiy added he can't "influence" the expected court ruling over PrivatBank. "I haven't called any of the judges, talked on the phone with any of them, haven't asked anything, there are many questions to our court, but I cannot influence it," he said.

At the same time, he does not rule out that Ukraine could lose litigations with Kolomoisky in courts if the pre-trial agreements are not made.

"In court, everything is not so honest, everything is not so clean, and we cannot win in all these cases. Therefore, we need to come to an agreement. ... before the trial. But an international expert that everyone knows is independent must arrange the agreement," Zelenskiy said, adding that he did not receive support for this position.

"And how can I resolve the issue without talking to people with whom I should resolve this issue? Then, please – NBU, Kolomoisky, court. Let them do it themselves. But everyone should know that if they lose, then those will be held accountable who were involved in these cases," Zelenskiy said.

The president also admitted the possibility of concluding an "amicable agreement," but denies potential compensation to ex-owners of the bank from the national budget.

"There may be an agreement. If we hear from one of the sources that there is weakness in one or another issues, we need to talk. We need to talk. You cannot threaten, but you need to talk. So that the state does not suffer losses ... You need to sit down and say: so there will be no money, no one will return anything, let's settle this as you want to live in this country. But they do not give me the opportunity of doing it," Zelenskiy said.

In May, Kolomoisky said he was ready to sign an “amicable agreement” with the country's authorities over PrivatBank in exchange for around 25% of shares in the bank.