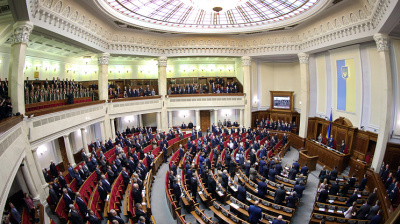 Ukraine's parliament fulfilled more of Zelenskiy's campaign promises with new laws to make the president, Central Election Commission and bureaucrats accountable before the law
By Ben Aris in Berlin September 11, 2019

Ukraine’s parliament, the Verkhovna Rada, continued its legislative tsumani by passing laws that allow the president to be removed by impeachment, cut the number of Supreme Court judges by a third and toughen the punishments for corrupt officials on September 10.

In its first session the new parliament that began work on August 29 passed a law that changes the constitution and removes deputies' parliamentary immunity that will come into force at the start of next year. A key campaign promise by President Volodymyr Zelenskiy, the change is designed to cut corruption in the government by allowing the investigation and jailing of deputies that abuse their office.

Now the government has extended this accountability to the president. While the Ukrainian constitution provides for removing a president by impeachment, until now there has been no accompanying law that lays out the mechanism for actually impeaching a sitting president.

The issue came to the fore during the Euromaidan popular protests in 2014 when the only legal route for removing the democratically elected then-president Viktor Yanukovych would have been impeachment for his blatant corruption and abuse of office, but it was not even attempted as there was no way of carrying it through.

The new bill adopted by Ukraine’s parliament spells out the procedures for a presidential impeachment. The decision puts into effect another key campaign promise made by the comedian turned politician Zelenskiy, who won the presidential election by a landslide in April.

The lack of an impeachment law also saved the previous president Petro Poroshenko as the opposition wanted to impeach him too for failing to implement many of the reforms implicit in the Euromaidan protests and in particular for dragging his heels on the anti-corruption drive. However, despite the calls to impeach Poroshenko, nothing happened, as there was no legal procedure in place.

In parallel Zelenskiy formally requested the Rada to dismiss the Central Election Commission (CEC) and has proposed to cut the number of judges that serve on the Supreme Court from 400 to 300.

In his final months Poroshenko expanded both bodies and stacked them with his allies in apparent preparation for a legal showdown with Zelenskiy, had the results of this year’s presidential and parliamentary elections been close. During the disputed elections in 2006 Viktor Yushchenko only took power from the incumbent president Leonid Kuchma after the Supreme Court ruled in his favour.

Zelenskiy has targeted the Central Election Commission, which he believes has been tainted by politics and is under the sway of the incumbent politicians who use their influence to secure their jobs in parliament.

Zelenskiy submitted a request to parliament to suspend the authority of the current Commission on the same day, alleging it has demonstrated “insufficient prudence” and “political bias” on numerous occasions.

As an example, he cited the CEC decision to deny 28 candidates' applications to register to compete in the July parliamentary elections. The CEC has also yet to establish election results in District No. 198, he said. The request needs the support of a two-thirds majority of parliament, the pravda.com.ua news site reports, a constitutional majority. The bill to nix parliamentary immunity also required a constitutional majority.

At a more mundane level the parliament also backed legislation reinstating punishment for crooked officials – a key demand of Ukraine’s donors. Last year the country’s top court ruled that the anti-corruption laws were not constitutional as they impinged on the “personal freedoms” of officials accused of graft, a decision that gutted the laws of their authority at the stoke of a pen.

Wthout repealing the so-called illicit-enrichment bill and replacing it with a working law, the International Monetary Fund (IMF) would have been unlikely to restart its aid to Ukraine this autumn. The new bill passed the first of three readings on September 11. Deputies also agreed to accelerate its passage so final approval may happen as soon as next week.

A team from the IMF arrived in Kyiv this week to open negotiations to restart its assistance to Kyiv. Under discussion is an expansion of the current Stand by agreement (SBA) that lasts about one and a half years, and a new Extended Fund Facility (EFF) that will last several years.

The laws are only part of some 500 laws that Zelenskiy has tasked the government to draw up or pass by the end of the year in a hectic legislative agenda to make a big a dent in the long overdue reforms as possible.