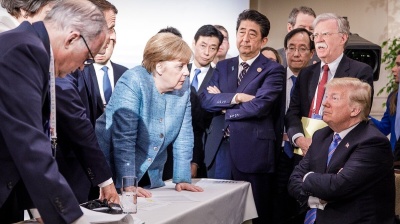 Ukraine’s President Volodymyr Zelenskiy added his voice to EU leaders in rejecting a proposal from US President Donald Trump to allow Russia back into G7
By bne IntelliNews August 23, 2019

Ukraine’s President Volodymyr Zelenskiy added his voice to those of major European economies in opposing a proposal from US President Donald Trump to allow Russia back into the Group of Seven (G7) advanced economies.

Trump’s statement on August 20 that it would be “appropriate” for Russia to re-join what used to be the G8 also drew a negative response from G7 members Germany, France and the UK, Reuters reported.

Ahead of the meeting of G7 leaders due to take place in France this weekend, the three G7 members pointed out that Russia had been excluded from the body after its illegal annexation of Crimea from Ukraine in 2014, followed by the backing of separatist rebels in the Donbas.

“Nothing has changed since March, 2014, when Russia’s participation in the G8 was stopped. Ukrainian Crimea is being occupied as before, Ukrainian Donbas is suffering from war,” Zelenskiy said, according to Reuters.

Two statements published on the Ukrainian presidency’s website on August 22 say that the president held telephone conversations with British Prime Minister Boris Johnson and Prime Minister of Canada Justin Trudeau, thanking both premiers for their support.

“The parties stressed the impossibility of restoring Russia's membership in the G7 as long as Russia systematically violates international law and undermines European and global security,” said the presidential statement following Zelenskiy’s conversation with Johnson.

“The interlocutors agreed that in the context of the ongoing Russian aggression in Ukraine, the occupation of Crimea and Russia's failure to comply with the Minsk agreements, it is impossible to talk about the return of the Russian Federation to the international platform where global problems are being solved,” it added.

Earlier this year, Ukraine joined the delegations of six other New Europe countries — Estonia, Georgia, Latvia, Lithuania, Poland and Slovakia — in walking out of a Parliamentary Assembly of the Council of Europe (PACE) session to “consult with the government” following the decision to reinstate Russia’s delegation in June.

As with G8, Russia had been suspended from the Council following the annexation of Crimea, but was reinstated after Moscow threatened to quit the Council completely, something that many members of the Council didn’t want to see. The decision has split the Council down the middle. Almost all of the western European members voted overwhelming to allow Russia back in. However, those countries close to the Russian border voted against readmission.