Ukraine international reserves grew by 22% in 2019 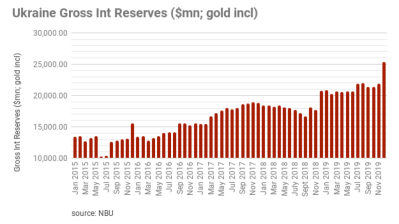 Ukraine's international reserves increased by 22% YTD to $25.3bn in 2019, according to the National Bank of Ukraine (NBU), which is the highest figure in the last 7 years.

The current amount of reserves not only exceeded the latest forecast of the NBU published in October ($23bn), but also "reached a seven-year high: the last time a greater volume was recorded back in December 2012," the regulator said in a statement on December 8.

The NBU increased international reserves in general by $4.5bn per year due to the continued favourable situation in the foreign exchange market, which is due to a further acceleration of economic growth and a steady influx of foreign capital into the country.

The central a bank added that the build-up of international reserves occurred in the year of double elections and peak payments on external public debt, which is an additional evidence of the strengthening of macro-financial stability in the country.

In 2019, the supply of currency in the interbank market significantly exceeded the demand. A high level of supply was provided by Ukrainian exporting companies, primarily farmers, who, despite a slight deterioration in the terms of trade in the world markets, increased sales, as well as foreign investors who sold $4.3bn to buy hryvnia-denominated government bonds, according to news agwncy Interfax.

External financing was actively attracted by state and private companies. At the same time, importers' demand for foreign currency was moderate, in particular due to lower world energy prices. The volume of repatriation of business dividends abroad was also smaller, the report said.