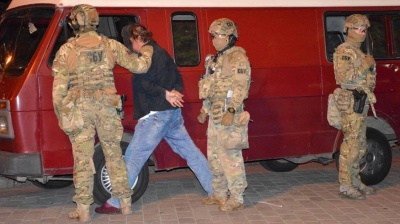 Hostages were freed unharmed from a bus in the western Ukrainian city of Lutsk after President Volodymyr Zelenskiy held talks with the hostage-taker and agreed to one of the latter's bizarre demands.

Passengers on the bus were held hostage at around 9am on July 21 by a gunman later named as 44-year-old Maksym Kryvosh, who had previous convictions, according to newswire reports.

Kryvosh fired shots and threw explosives, which failed to detonate.

Counter-terrorism officers surrounded the bus and cordoned off the city centre, but it was the president’s intervention that persuaded Kryvosh to allow the first three hostages to leave.

Zelenskiy, who was meeting with the President of Switzerland Simonetta Sommaruga on July 21, posted a short video in which he said: "Everyone should watch the 2005 film Earthlings.”

Earthlings is a US-made documentary film about humankind's dependence on animals for economic purposes.

Among Kryvosh’s other demands — not complied with by the president — were for senior politicians to say publicly that they were terrorists.

Shortly after Zelenskiy posted the video, security forces moved in to arrest Kryvosh and freed the remaining 10 hostages. After the terrorist was detained, firearms and grenades were seized, the interior ministry said in a statement. According to Interior Minister Arsen Avakov, the gunman had a functioning pistol, a machine gun and a combat grenade.

“Congratulations to all those who fought all day for the liberation of people in Lutsk and, in fact, for their lives. We all experienced and followed the developments, worked out plans and changed them according to the situation. Human life is the most important value. We have not lost anyone,” Zelenskiy tweeted late on July 21.

"13 hostages have been released. At the moment, each of them is being examined by doctors, food and water are being provided, and their relatives are being contacted. They will provide initial evidence," Avakov said after the gunman’s arrest.

UK, Canada impose sanctions on Lukashenko and his top officials
10 hours ago
Poland tightens restrictions in response to rising coronavirus cases
12 hours ago
World must tell Turkey to “get out” of Caucasus says Armenian PM
15 hours ago
French President Macron promises Belarus’ opposition leader Tikhanovskaya to do all he can to help
1 day ago
Nobel laureate and Coordinating Council member Svetlana Alexievich leaves Belarus for medical treatment in Germany
1 day ago