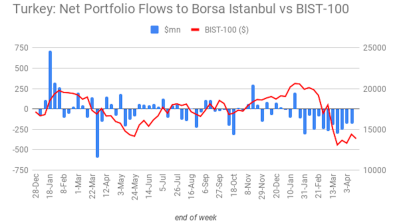 Turkish companies are allowed to distribute up to 25% of their 2019 profits until September, according to an article in an omnibus law approved on April 15 by Turkey’s parliament.

The banks had already been “advised” not to distribute dividends from their 2018 and 2019 profits. Isbank tried its luck last year, but banking watchdog BDDK blocked the move.

The legislature also approved an article to provide Turkey’s sovereign wealth fund, TVF, with special powers that permit it to acquire stakes in companies under steps proposed by the government.

It is unknown whether the TVF is sitting on any cash as it is exempt from any kind of audit and has not released any financials or annual reports since it was founded four years ago.

Lawmakers also voted approval for a tricky article on banning layoffs for three months amid the coronavirus (COVID-19) outbreak. The article allows employers to send workers on to unpaid leave for three months, during which period the government will pay Turkish lira (TRY) 1,177 (€156) per month to each worker.

The monthly net minimum wage stands at TRY2,324 for 2020. The hunger threshold (minimum food expenditure for a four-person family) stood at TRY2,345 as of March, according to a monthly survey by yellow labour union Turk-Is.

On April 14, President Recep Tayyip Erdogan stepped back once again from insisting on articles of legislation that would require social media companies to store Turkey-based users’ data in Turkey. Erdogan has been waiting for a chance to impose this law on the companies but has not yet found it.

The cut in Turk Telekom’s dividend payments will be another blow to Garanti Bank, Akbank and Isbank as they are trying to rescue their invested money before Turk Telekom’s licence expires. The lenders took control of a stake in the company after the owner defaulted.

Meanwhile, the Turkish lira’s slide into territory not seen since Turkey’s 2018 summer currency crisis continued on April 16. The lira breached the 6.95-to-the-dollar threshold.

State lenders are active on the USD/TRY market 24 hours a day on all five trading days with traders ready to respond to any lira weakness—there’s news value when the sales of these banks exceed $1bn on a day when all emerging-market peer currencies fall apart and the lira nonsensically remains somewhat resilient.

The Turkish central bank’s gross FX reserves fell to $56bn as of April 10 from $58.2bn a week ago and $77bn at end-February, lagged official data from the national lender’s weekly bulletin showed on April 16.

Traders are the most bearish on the lira relative to the South African rand (ZAR) in 10 months, based on the cost of hedging against declines using put options, Bloomberg reported on April 16.

The rand has slumped 25% against the dollar this year compared with the lira’s 14% decline—but South Africa’s authorities don’t intervene in the currency market.

“TRY is the new ZAR”

Turkey may run out of ammunition to defend the lira, given dollar-debt redemptions in coming months that will weaken the currency, according to Luis Costa of Citigroup said in a note to clients. “TRY is the new ZAR,” he added.

“I'm tempted to book profits up [in supermarket retailer] Migros (MGROS)] around [TRY]30. The weakening lira will affect their fx debt negatively, brick and mortar sales declines may only just be offset by the boom online and the PE holders who still have about 10% I think may decide to flip at any time once the lock-up expires,” Julian Rimmer of Investec said on April 16 in a note to investors.