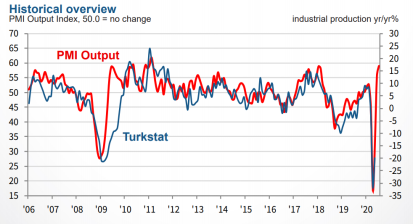 The headline Istanbul Chamber of Industry Turkey Manufacturing PMI posted 56.9 in July, up from 53.9 in June and the highest since February 2011. Any figure above 50.0 denotes expansion.

Andrew Harker, economics director at IHS Markit, said: “The PMI data at the start of the second half of the year provides optimism that the recovery from the [coronavirus] COVID-19 downturn is solidifying. Sharp expansions in output and new orders were recorded as business conditions gradually return to normal, with even signs of capacity pressures emerging in the sector.

“Growth will help to claw back some of the output lost during the downturn, but will have to be sustained for a longer period for a full recovery to be secured.”

The manufacturing improvement will boost the fragile Turkish economy, but one of Turkey's biggest battles at the moment is the effort to ensure that the key international tourism industry does not lose its entire summer season to the pandemic. Local reports indicate June and July were terribly bad months for hoteliers but efforts are under way to secure a profitable August, partly by catering to Russian arrivals, with Russia having lifted restrictions on travel to Turkey.

A move towards more normal manufacturing conditions following the peak of Turkey’s virus outbreak and the reopenings of customers resulted in a second successive monthly increase in new orders at Turkish manufacturers, IHS Markit added.

It added: “Moreover, the rate of expansion accelerated and was among the fastest since the survey began in June 2005. New export orders also rose, albeit to a lesser extent than total new business. Production growth accelerated, and was the fastest since February 2011. Output has now risen in two consecutive months, with around 31% of firms signalling an increase in July. The strength of the rise in new orders started to impart pressure on capacity, as signalled by a first accumulation of backlogs of work since August 2017.

“Firms used inventories to help meet order requirements, leading to the sharpest fall in stocks of finished goods in four months. Higher production requirements led to increases in employment and purchasing activity, with both rising to greater extents than in the previous month.”

The COVID-19 pandemic did continue to impact supply chains in July through restrictions on transportation, IHS Markit noted. “Rising demand for inputs also contributed to another marked instance of lengthening delivery times. Input prices continued to rise sharply, albeit at a slower pace than in the previous month. The rate of output price inflation quickened, meanwhile, to the fastest since March as improving demand enabled firms to pass on higher input costs to customers,” it added.