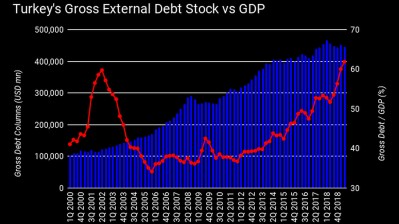 Last month, the flag carrier received regulatory approval from the Capital Markets Board (SPK) to issue up to $2bn worth of eurobonds abroad.

In May, two unnamed people with knowledge of the matter told Bloomberg that Turkish Airlines had sent a request for proposals to international lenders for options including a conventional bond or sukuk.

The debt was likely to have a maturity of five-to-10 years, according to the sources.

The airline has hit some business turbulence with its move to Turkey’s new mega airport, Istanbul Airport, where operations have not commenced as smoothly as was hoped for.

The certificates due March 2027 pay a 4.2% annual coupon and are listed on the Irish Stock Exchange.

Standard & Poor’s rates the airline at B+/Stable and Moody’s Investor Services at B1.

On October 17, the SPK’s weekly bulletin showed that Mersin International Port (MIP- Mersin Uluslararasi Liman Isletmeciligi), a JV between Singapore's PSA International and Akfen Holding of Turkey, has received approval to issue up to $650mn worth of eurobonds.

At issuance, the papers was provisionally rated Investment Grade by both Moody’s (Baa3) and Fitch (BBB-).

It was recorded as Turkey’s first ever infrastructure bond issue. The European Bank for Reconstruction and Development (EBRD) bought $79.5mn of the paper.

On September 4, MIP said in a written statement that its eurobonds, listed on the Irish Stock Exchange, had become callable at par and that it was “closely monitoring opportunities to refinance the notes in the capital markets in the available financing windows between now and the maturity date”.

PSA-Akfen placed a winning bid of $755mn in 2005 to operate Mersin port, located on the eastern Mediterranean coast, for 36 years. It took over the port in May 2007.

In June, Moody’s downgraded MIP to B1/Negative from Ba2 following a sovereign downgrade.

“As of end-December 2018, MIP's cash on balance sheet amounted to some $93.4mn, of which only $1.4mn was held in Turkish placements. This reflects MIP's policy to hold a limited amount of cash within the local banking system to cover day-to-day costs of operations and to convert revenues received in Turkish lira into USD on a regular basis,” said Moody's. The rating agency also noted that, in addition, MIP held a $270mn receivable against its shareholders.

Notwithstanding a strong operational performance, MIP's expected cash flow generation combined with available foreign currency deposits will not be sufficient to fully cover its $450mn bond, which is due in August 2020. While this exposes MIP to a refinancing risk in more volatile financial markets, Moody's has positively factored in as mitigating factors the company's strong free cash flow generation combined with the presence of a strong shareholder—PSA International Pte Ltd (Aa1 stable), which owns 51% of the company's shares, and has provided operational support to MIP under its ownership.

On October 16, state-run Vakifbank said in a stock exchange filing that it obtained a 7-year $417mn securitisation loan with a grace period of three years.

Also on October 18, glassmaker Trakya Cam, a Sisecam Group company, said in a stock exchange filing that it obtained a €200mn syndicated loan. A €175mn 3-year tranche came with a cost of Euribor+2.65% while the remaining €25mn tranche was pegged at Euribor+2.95%.

Moody’s places Halkbank on review for a downgrade

Also on October 18, Moody’s placed on review for a downgrade the caa2 Baseline Credit Assessment (BCA) and the B3 long-term bank deposit and senior debt rating of Halkbank following the announcement on October 15 that New York Justice officials have charged Halkbank with participation in a scheme to circumvent US sanctions on Iran. The state bank allegedly participated in the illicit movement of about $20bn in Iranian oil revenue through the US financial system between 2012 and 2016.

In June 2019, Halkbank's capital buffers stood at around $1bn above minimum regulatory requirements, while the lender’s profitability was still challenged by a difficult operating environment, with net profit in H1 of around TRY600mn (around USD100mn), the rating agency said.

The assessment reflected (1) Halkbank's significance to the Turkish banking system, which is supported by its large national market share of deposits (12%, third placed in the country) and loans (11%, second in the country); and (2) indirect government control through the Turkish Wealth Fund, which controls 51% of Halkbank's shares.

“Turkey in recent years suffered two ‘sudden stops’ in foreign capital inflows rivalling the Great Recession in severity. The first was in 2015/6 due to RMB devaluation fears. The second began in 2018 and is ongoing. Yes, the current account has corrected, but it had little choice...,” Robin Brooks of the Institute of International Finance (IIF) said on October 18 in a tweet.