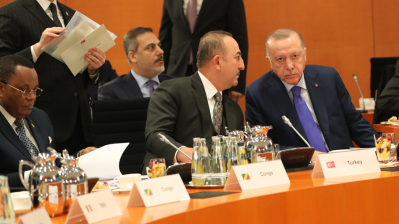 Erdogan (right) has been fighting for years to have the Halkbank Iran sanctions case dropped.
By bne IntelliNews January 22, 2020

Federal prosecutors in New York on January 21 said that Turkey’s Halkbank should pay millions of dollars in fines for its ongoing obstinate failure to respond to a US indictment on Iran sanctions-busting charges.

In a court filing, the US government asked a federal judge to impose a daily $1mn fine for contempt of court that would double each week the state-owned bank—which has claimed the US has no jurisdiction over it—refuses to appear in the case. The requested fine could total $7mn after the first week of non-compliance and $21mn after two weeks, and nearly $1.8bn by the end of eight weeks.

Last October, prosecutors of the Southern District of New York (SDNY) charged Halkbank with aiding a years-long conspiracy to help Iran evade US economic sanctions and access $20bn in oil revenue frozen in Turkish accounts. But the bank has continuously refused to accept the serving of the indictment or answer the case. Prosecutors have thus described it as a “fugitive” from justice.

The case has angered Turkish President Recep Tayyip Erdogan who has talked about an “international coup attempt” in claiming that sanctions-busting allegations are the result of efforts made by exiled Gulenist enemies who want to topple him. Another aspect of the affair is that in a previous trial related to the alleged sanctions-evasion conspiracy, Erdogan was implicated in the case. He has denied any wrongdoing. The Turkish president has, meanwhile, attempted to work with US counterpart Donald Trump to get the SDNY investigation into the allegations stopped.

At the court, the prosecutors said the proposed penalty “is an appropriate and necessary sanction to apply a sufficient coercive pressure to cause the defendant to cease its contempt and appear in this matter,” Reuters reported.

A US-based lawyer for Halkbank did not immediately respond to the news agency’s requests for comment.

The indictment includes fraud and money laundering charges with accusations that Halkbank and its executives used money servicers and front companies in Iran, Turkey and the United Arab Emirates to evade sanctions.

Prosecutors also said Halkbank undertook transactions on Iran’s behalf that would have exposed the lender to sanctions. Those allegedly included allowing revenue from oil and gas sales to be spent on gold, and facilitating sham purchases of food and medicine.

Last month, US District Judge Richard Berman, who oversees the case, rejected Halkbank’s request to put the case on hold. He said the public had a strong interest in a “prompt adjudication” of Halkbank’s alleged role in a conspiracy to undermine the sanctions.

A hearing is scheduled for February 25. Halkbank has asked a federal appeals court in Manhattan to stay the case.

The dispute has caused tension in US-Turkish relations. Nine people have been criminally charged. They included former Halkbank executive Mehmet Hakan Atilla, who was convicted in January 2018 after another defendant, wealthy Turkish-Iranian gold trader Reza Zarrab, pleaded guilty and testified against him.

Atilla returned to Turkey last year after leaving prison, and became general manager of the Istanbul Stock Exchange in what was seen as a pointed snub from Ankara to the US prosecutors.