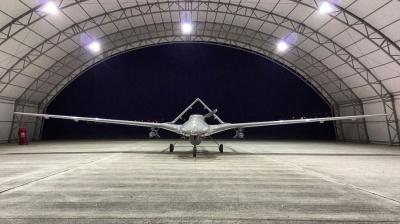 An armed Bayraktar TB2 as used by the Turkish Armed Forces. / Baykar.
By bne IntelIiNews June 23, 2022

Turkey must be cautious when it comes to delivering more weapons to Ukraine amid the war with Russia, the head of the Turkish Defense Industry Agency has said.

“We are much more careful… Turkey is the only country I guess that can give a call to both parties [Ukraine and Russia] and call them to the peace table. How can you do this if you send tens of thousands of weapons to one side?” Ismail Demir told The Wall Street Journal in an interview.

Though Turkey is a Nato member, the question of how far it might gravitate towards cooperation with Russia is an ever-present concern for Western diplomats.

Ukraine is known to have purchased more than 20 Bayraktar TB2 armed drones from Turkey in the couple of years prior to the outbreak of the war in late February, while at least 16 more were ordered before the Russian invasion of Ukraine. Ukraine appears to have scored some battlefield successes against Russian military hardware with TB2s.

Asked if Turkey was continuing to supply weapons including TB-2s to Ukraine, Demir said: “There are things going on, but I’m not in a position to say, but we are much more careful.”

Turkey has no hesitation over selling non-lethal military equipment, such as protective gear, to Ukraine, Demir added.

““We have to be able to talk to both sides, someone should be close enough to both parties, to build trust [in the effort at achieving peace]. Our priority is to make sure that peace prevails,” he said.

Turkey, meanwhile, remains subject to arms supply bans from several European countries and the US. The boycotts have been brought in in response to matters including Turkey’s decision to acquire S-400 advanced missile defence systems from the Kremlin, military incursions made by Turkish forces in Syria and Ankara’s disregard for basic human rights. The US boycott is an unofficial one run by a bipartisan majority in Congress. It rules out shipments of major arms to Turkey.