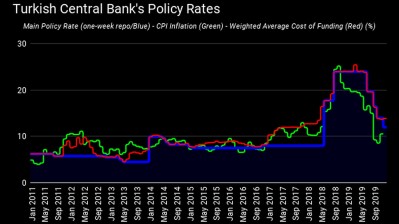 Turkey’s central bank on December 12 caused a dash of surprise in the markets by cutting its key interest rate by a bigger-than-anticipated 200 bp—although for those who go with the theory that strongman president Recep Tayyip Erdogan has taken full charge of monetary policy as part of his strategy to save his political skin, turning the regulator into little more than a stooge in the process, there was no surprise at all.

Since Erdogan fired the central bank governor by executive presidential decree in July for not adhering to an acceptable monetary direction, the rate-setters have cut the rate by a cumulative 1,200 bp to 12%, compared to annual inflation recorded at 10.6% in November. The rapid easing has occurred in tandem with efforts by officials to throw open the credit taps and greatly accelerate the recovery of Turkey’s economy, hobbled by a painful recession in the wake of last year’s currency crisis.

Prior to his bungling of the economy, hardly anyone could imagine the day when the seemingly invincible Erdogan would become vulnerable to a challenger, despite his grim lack of democratic credentials and sweeping disregard for many citizens’ human rights, wretched aspects of his 17-year populist rule that have always gone down badly with many among the polarised Turkish electorate. However, two allies-turned-rivals are currently in the midst of forming political parties and Istanbul mayor Ekrem Imamoglu, who humiliated the Erdogan candidate in the business and cultural capital firstly with a victory in the March local elections and secondly with a landslide in the June ‘revote’ demanded by the president, is still riding a wave of popularity that could at some point see him battle Erdogan for the presidency.

Opinion polls in Turkey are notoriously unreliable but, arguing in a note that “domestically, Erdogan is now facing major political challenges”, BlueBay Asset Management analyst Timothy Ash cited a December 11 Panoramatr poll that found 70% of the population saw the economy as the biggest issue in Turkey, while three-quarters appeared less than happy with economic policy management.

“I had assumed/hoped they would slow the pace of cuts, maybe just doing 100bps this month, given that they moved the number of monetary policy committee meetings from 8 to 12 in 2020,” Ash also said in his note, adding: “I had assumed they would have used that as an opportunity to do less this time around, but then smooth out 400-500bps cuts then thru 2020. I was clearly wrong.”

Ash said the central bank still appeared “hell bent on getting policy rates down as quickly as they can—with the message from the presidency to have single digit policy rates as soon as possible, and in Q1 at the latest. That could be challenging as most forecasts show some upward pressure in inflation in Q1, and then flat-lining for the rest of 2020, around the 9-10% level.”

Ash concluded: “So the script for the CBRT [Central Bank of the Republic of Turkey] to follow is cut as quickly as you can get away with, without sacrificing macro-financial stability, and get credit growth firing on all cylinders again.

In explaining its latest cut, the CBRT said: "The improvement in macroeconomic indicators, inflation in particular, supports the fall in country risk premium and contributes to a benign outlook in cost factors. Underlying trend indicators, supply side factors and import prices lead to an improvement in the inflation outlook. In light of these developments, recent forecasts suggest that inflation is likely to materialize close to the lower bound of the October Inflation Report projections for the end of the year, with risks around the disinflation path for 2020 being balanced."

Seker Invest economist Serkan Gonencler said in a note put out after the rate cut that the CBRT’s aggressive rate cut cycle has also facilitated an easing in loan rates which has led to a significant revival in lending activity of late, particularly on the consumer front.

“The 13week average annualized growth of consumer loans exceeded 45% recently from nil just few weeks ago. This should support GDP growth for 4Q19 and most likely for 1Q20, leading to 3-4% growth rates (or probably more). That said, given the high indebtedness of the private sector (which curtails investment appetite), the funding constraints of the banking sector and the historic high levels of the unemployment rate, it remains to be seen whether this recovery could be sustainable and the government’s 5% GDP growth target [for 2020] met,” Gonencler added.

In a commentary entitled “Turkish central bank not taking its foot off the pedal”, William Jackson, chief emerging markets economist at Capital Economics, observed: “We had anticipated a smaller cut on the basis of CBRT governor Murat Uysal’s previous media comments that interest rates wouldn’t be lowered much further. We suspect that government pressure for lower interest rates, which has intensified recently, has put paid to any thoughts that central bank policymakers might have had about halting the easing cycle.”

He added: “The 200 bp interest rate cut (to 12.0%) by the Turkish central bank as well as other recent tweaks to boost lending suggest that policymakers will try to meet President Erdogan’s demand to bring rates down to single digits and bolster growth. As a result, we have pencilled in further rate cuts at the next couple of meetings. But we still expect the central bank to start raising interest rates in the second half of next year.”

The 200 bp cut was larger than both the Capital Economics and consensus forecasts (100 bp and 150 bp, respectively) and, as a result of the national lender’s decision, the average interest rate on central bank liquidity provision is now a little lower than it was before the country’s currency crisis broke out last year.

The accompanying statement published with the interest rate decision gave little sign that policymakers were turning more cautious, Jackson noted, saying: “[It] downplayed inflation risks and stressed the ‘disinflation’ path (referring to its expectation that inflation will start declining in 2020—something that only the central bank seems to forecast). There was also no acknowledgement that growth is looking increasingly unbalanced.

“Accordingly, we now think that the central bank will do all it can to meet the president’s demands to bring interest rates down to single digits. The scope to lower interest rates will, of course, depend on moves in the lira. But, for now, we have pencilled in another 250bp of cuts in the one-week repo rate in early 2020, bringing it to 9.50% (we previously anticipated that the policy rate would reach a trough at 12.0%).”

Lower rates ‘not here to stay’

In Capital’s view, however, Turkey’s lower interest rates are not here to stay. “Inflation has already started to rise and, with expectations unmoored, we expect it to remain in double digits over the course of next year. Real interest rates would turn negative by early 2020. More importantly, looser policy is driving a strong recovery in domestic demand, which has caused net trade to become a drag on growth and will start to cause the current account position to deteriorate,” Jackson said.

That situation, he went on, would likely cause the lira to come under renewed pressure. While the currency has been relatively stable in the second half of this year, ranging between 5.60/$ and 5.80/$, Capital expected it to depreciate up to 7.50/% by the end of next year. Worries about what this will do to inflation and the servicing of foreign currency debts will probably force policymakers to tighten, Jackson added.