TURKEY INSIGHT: Credit-juiced economy back on road of growth 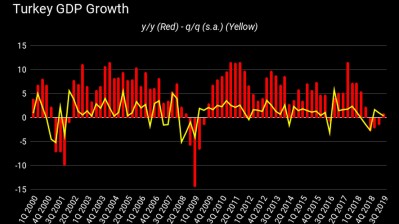 The Turkish economic recovery has just about reached the bottom of an upright on a “U” and the question is now whether that “U” can be turned into a “V” by the Erdogan administration’s attempt to aggressively pump credit.

Take it or leave it, that is one interpretation of Turkey’s latest economic situation following the release on December 2 of the country’s official third-quarter GDP figures, showing an expansion of 0.9% against a market consensus expectation for 1.0%.

“A little disappointing in the end—not quite the V-shape that some had predicted,” Timothy Ash at Bluebay Asset Management responded to the data announcement in a note to investors.

President Recep Tayyip Erdogan knows full well that most of the electorate in Turkey see him as having bungled the economy and that only a rapid recovery can restore his fortunes in the polls. Now facing the likelihood of two new political parties being established by former close allies in coming weeks, he will see the Q3 gain as a start on the road to recovery that needs rocket-fuelling for a quick acceleration in defiance of his critics. 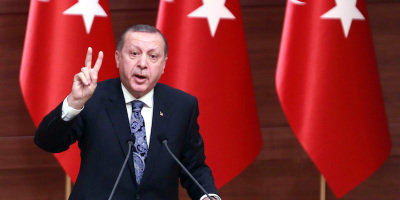 That's right, Erdogan (seen during the 2017 referendum campaign) needs one of those. Officials will be working round the clock.

The Turkish Statistical Institute (TUIK) figures broke a sequence three consecutive quarters of contraction, showing Turkey was officially shaking off the recession which came in the wake of last year's currency crisis. They also recorded the economy growing at a seasonally and calendar-adjusted 0.4% pace in Q3 versus Q2, marking the third positive quarter-on-quarter reading in a row.

In a note to investors on the latest growth figures, entitled “Economy continues to recover, strong growth likely in Q4”, Jason Tuvey at Capital Economics said the Q3 quarter on quarter figure of 0.4% was weaker-than-expected “but the lagged effects of policy loosening mean that the recovery is likely to gather pace over the next few quarters”.

Looking at monetary easing, which has seen the central bank—under intense government pressure—cut 1,000 bp from its benchmark policy rate since July, Tuvey added: “The authorities’ pursuit of stronger growth is likely to fuel a fresh build-up of macro imbalances that we think will prompt the central bank to reverse course and hike interest rates from the middle of next year.”

Tuvey also noted that the q/q outturn was slower than the downwardly-revised 1.0% q/q increase in GDP in Q2 and was weaker than the 1.1% q/q expansion anticipated by the consensus.

The breakdown of the data showed that domestic demand remained robust, Tuvey observed, with household consumption growth at 1.9% q/q, “a solid performance following the 3.4% q/q rise in Q2”. Inflation eased significantly over the course of Q3 as the effects of last year’s currency crisis faded, while government spending increased by 1.9% q/q, “a touch slower than in Q2 but further evidence that the government has continued to pump fiscal stimulus into the economy”, added the analyst.

“The one piece of disappointing news”, according to Tuvey’s note, was that investment contracted for a sixth consecutive quarter, albeit by a modest 0.1% q/q.

“Finally, the rebalancing of net trade witnessed over last year and in early 2019 is over,” said Tuvey. “Admittedly, exports posted another solid rise of 5.5% q/q. But strong domestic demand growth has started to feed through into imports, which jumped by 10.5% q/q, the sharpest increase [since] late-2003.”

In year-on-year terms at least, GDP growth in Turkey could reach as much as 5% in Q4 and early 2020, Capital now forecasts. “But efforts to speed up the recovery are likely to fuel a fresh build-up of macro imbalances. This is likely to cause inflation to steadily rise, the lira to weaken and the central bank to ultimately hike interest rates,” Tuvey concluded.

Another insight into the state of Turkey’s recovery is offered by the latest manufacturing purchasing managers’ index (PMI), also published on December 2. The headline PMI remained in contraction territory in November but there was “only a marginal softening of business conditions in the [manufacturing] sector” amid signs of improvement, data compilers Istanbul Chamber of Industry and IHS Markit said.

On November 28, an analysis entitled “Turkey: Credit Remains the Main Policy Tool” was released by the Institute of International Finance (IIF) following a research trip undertaken to the country by the institute’s head of emerging market Europe research, Ugras Ulku, and IIF associate economist Benjamin Hilgenstock.

“Analysts we spoke to were generally of the view that the pick-up in bank lending in 2019 Q3-Q4 … will likely support consumption-driven growth through 2020,” Ulku and Hilgenstock said, adding: “This could be TRY [Turkish lira] negative as consumption has a high import content. There appeared to be broad agreement that the pace of ongoing bank lending to consumers .., if sustained, could help growth momentum to gain pace in coming quarters. At the same time, this would lead to higher imports, and thus a wider current account deficit in 2020.

The IIF analysts also said that in line with their expectations, changes in reserve requirement regulations that the Central Bank of the Republic of Turkey (CBRT) introduced in late August have incentivised banks to ramp up lending. “The CBRT essentially lowered reserve requirements (and increased remuneration for them) for banks with y/y credit growth above 10%... Additionally, the central bank has lowered its key policy rate by 1000bps since July to 14%, cutting banks’ cost of funding substantially and allowing them to lower lending rates,” they recapped.

In monetary policy, the consensus view among local analysts seemed to be that the CBRT will continue to cut its key policy rate by as much as 200bps to 12% in December, said Ulku and Hilgenstock, noting: “With a negative output gap likely to remain sizable in the near term, it is widely expected that the CBRT will continue to cut through early 2020, despite 12-month headline inflation set to pick up from 8.6% in October to 12-13% in the first half of 2020.

“Some analysts expressed a different view suggesting that the CBRT will halt rate cuts until the second half of 2020 when 12- month headline inflation will likely slow down once again. While the CBRT forecasts headline inflation to slow down to 8.4% in December 2020, markets expect a weaker slowdown to 10%...”

On the fiscal policy front, weaker-than-projected output growth “poses a major risk for the government’s fiscal deficit target of 2.9% of GDP for 2020”, the IIF analysts warned.

They added: “For 2019, transfers of CBRT profits and reserve funds to the budget will likely keep the fiscal deficit below 3% of GDP... There is broad agreement among local analysts that one-off revenues such as profit and reserve fund transfers from the CBRT to the budget will likely be considerably smaller in 2020 than this year’s 1.8% of GDP. As a result, the government may have to introduce measures to keep the deficit from widening above its target of 2.9% of GDP in 2020 in the event of output growth remaining weaker than the underlying assumption of 5%. Additional policy stimulus to boost consumption without increasing productivity would add more to Turkey’s macroeconomic imbalances (namely inflation and the current account deficit).

“This could potentially trigger renewed depreciation pressures on the TRY. The success of the policy objective of rebalancing Turkey’s growth model away from consumption depends critically on larger and well-targeted capital spending geared towards increasing productivity, competitiveness, and eventually exports.”

“Not that much confidence”

In other comments on the GDP data, Piotr Matys, emerging markets forex strategist at Rabobank, was quoted by Reuters as saying: “The key issue for me is that there is still not that much confidence among households and corporates.”

He added that authorities needed to make significant progress on economic reforms to restore confidence amongst investors and locals, with efforts so far having focused mainly on short-term solutions.

Third quarter growth was driven by the agricultural sector which expanded 3.8%. Industry grew 1.6% and services grew 0.6%. However, the construction sector, which was the big driver in years of strong economic growth in Turkey before last year’s balance of payments crisis struck, shrank 7.8%.

QNB Finansbank said in a note that private consumption was the major driver of growth quarter-on-quarter in Q3, but advised that its contribution had weakened.

“The [latest] economic confidence index and its components suggest a broad-based recovery in economic activity in Q4,” the QNB Finansbank note added.

Trade data on December 2 recorded exports as flat in November, with imports jumping 9.2%, resulting in a tripling of the trade deficit to $2.15bn.

Mongolia’s wrestling culture: From the grasslands to the cage

“When you’re little, they make you wrestle sheep. When you get older you wrestle horses, and finally, you wrestle camels,” says one wrestler. Can country’s centuries-old wrestling tradition be translated to domination of professional MMA?