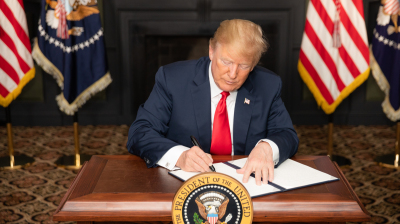 Battle was fully joined in the US assault on Iran’s economy as on August 6 Donald Trump announced the triggering of the first wave of heavy sanctions. The EU, meanwhile, responded by unveiling a "blocking statute" that will seek to protect European firms doing business with Iran against action from Washington.

To make the sanctions campaign work and force the Iranians to the table for a renegotiation of their role in the Middle East, the Trump administration will have to overcome opposition not just from Iran but from all the other signatories to the multilateral Iran nuclear deal, namely the UK, Germany, France, Russia and China. The EU as a whole, third biggest destination for Iranian exports India, and fifth biggest Turkey, have also informed the US they are opposed to the sanctions, first outlined in early May by Trump when he unilaterally pulled the Americans out of the nuclear deal.

The accord, signed in late 2015, lifted crippling sanctions previously levied against Tehran in return for agreed measures that would bar the path to the development of an Iranian nuclear bomb. Trump argues it is a "horrible, one-sided deal" that means the Middle East remains too exposed to Iran’s “malign activities” as it leaves the Iranians flush with cash to fuel conflict.

Trump confirmed that from midnight (US east coast time) sanctions would be reimposed on the Iranian government’s purchase or acquisition of US banknotes; Iran's trade in gold and other precious metals; graphite, aluminium, steel, coal, and software used in industrial processes; transactions related to the Iranian rial (IRR); activities relating to Iran's issuance of sovereign debt and Iran's automotive sector.

A second, more punishing wave of sanctions is due to go into effect on November 4. These will target Iran’s oil, gas and petrochemical exports; Iran's port operators and energy, shipping, and shipbuilding sectors and transactions by foreign financial institutions with the Central Bank of Iran.

Bad news from Beijing
The attempt by the US to almost entirely shut down Iran’s lifeline oil exports by the end of this year suffered a big blow on August 3 when the biggest buyer of Iranian oil, China, reportedly declined a request from Washington envoys to stop importing Iranian crude. Turkey in late July told the US it is not obliged to cease taking energy deliveries from Iran.

Trump warned that individuals or entities who breach the sanctions aimed at Iran risk "severe consequences".

"I am pleased that many international firms have already announced their intent to leave the Iranian market, and several countries have indicated that they will reduce or end imports of Iranian crude oil," the president said in a statement.

"We urge all nations to take such steps to make clear that the Iranian regime faces a choice: either change its threatening, destabilising behaviour and reintegrate with the global economy, or continue down a path of economic isolation."

Iranian Foreign Minister Mohammad Javad Zarif said it was the US that was being "isolated". He remarked that it was hard to imagine negotiating with someone who had torn up an agreement that had taken so long to reach. "Who can believe Trump is serious about talks?" he asked.

“Talks need honesty”
Responding to Trump’s statement on Iranian state television, Iranian President Hassan Rouhani said the act was "psychological warfare". Rouhani rejected the idea proposed by Trump of last-minute talks. "We are always in favour of diplomacy and talks... but talks need honesty," he said.

Referring to Trump’s recent offer to meet him as now meaningless, Rouhani added: “The person who has knifed his rival’s arm… now says that he wants talks. They should first take out their knife and put it in their pocket.”

On July 18, head of the Iranian Center for Strategic Studies Hesamoddin Ashna, who serves as an advisor to Rouhani, said Trump was a rogue US president who has created “something called ‘the West minus Trump’” which Iran must exploit in attempting to improve relations with Western nations.

The US insists it is not attempting to achieve regime change in Iran, but is only out to “modify” the country’s behaviour.

Iran has said it will stay in the nuclear deal, formally known as the Joint Comprehensive Plan of Action (JCPOA), and comply with its requirements as long as it continues to receive a certain level of economic benefits.

The UK, France and Germany, as well as the EU’s foreign policy chief, in a joint statement expressed "deep regret" that the US was going ahead with sanctions and pledged to abide by the accord. They said the nuclear deal was “working and delivering on its goal” of limiting Iran’s nuclear programme and was “crucial for the security of Europe, the region and the entire world.”

AP quoted an unnamed senior Trump administration official as saying the US was “not particularly concerned” by the move.

Larger companies exiting
It is thought that most of the larger European companies will continue choosing to end trade and investment relationships with Iran because, given their links to the US financial system and US investors, and, in some cases, their ownership of US-based assets, they are highly exposed to secondary sanctions from Washington.

The limited amount of action to secure the nuclear deal announced by the EU to date, such as the provision of a financing channel in Austria for trade with Iran, has largely been undertaken with small and medium sized companies in mind. Even the EU’s own lending arm, the Luxembourg-based European Investment Bank (EIB), has baulked at moves by Brussels to persuade it to do business with Iran, arguing the funding it raises in the US would be under threat.

Under the blocking statute, European firms have been instructed that they should not comply with demands from the White House for them to drop all business with Iran. Those who nevertheless opt to pull out will need to obtain authorisation from the European Commission. Without an authorisation, they face the risk of being sued by EU member states. A mechanism has also been opened to allow EU businesses impacted by the sanctions to sue the US administration in the national courts of member states.

A joint statement issued by the foreign ministers of the EU’s 28 member states said that there was a “determination to protect” the bloc’s economic interests.

The statement said: “The lifting of nuclear-related sanctions is an essential part of the deal; it aims at having a positive impact not only on trade and economic relations with Iran, but most importantly on the lives of the Iranian people.

“We are determined to protect European economic operators engaged in legitimate business with Iran, in accordance with EU law and with UN security council resolution 2231. This is why the European Union’s updated blocking statute enters into force on 7 August to protect EU companies doing legitimate business with Iran from the impact of US extra-territorial sanctions.”

ATR delivers in the nick of time
The day before Trump’s announcement of the recommencement of sanctions, French-Italian short haul plane maker ATR managed to deliver five aircraft to IranAir.

This gave foreign minister Zarif a chance to comment on how the fact that the sanctions target Iran’s ability to purchase passenger planes showed the US contempt for the Iranian population at large. “If you have [good] relations with people of Iran, then the question is why the first round of sanctions you imposed were targeting planes?” he said.

Around 2,000 people have died in plane crashes in Iran since the 1979 Islamic Revolution. The country’s ability to source spare parts or new planes has been limited several times over the decades by Western sanctions.