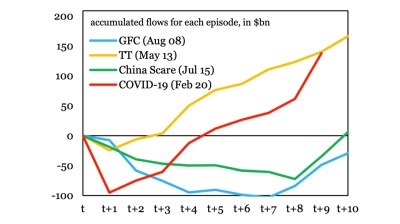 Emerging markets have seen record levels of inflows in the last month as investors adjust to the fact that 2021 may be a lot better than 2020 / bne IntelliNews
By Ben Aris in Berlin December 7, 2020

Emerging markets (EM) saw record amounts of inflows during the last weeks as the pandemic is expected to recede next year and the political uncertainty from the US presidential elections is almost over.

“We estimate that EM securities attracted around $76.5bn in November, significantly higher than the $23.5bn in October, Recent headlines on potential vaccines, combined with the resolution of uncertainty regarding the US election, have benefited capital flows greatly,” economist Jonathan Fortun, who tracks capital flows at the Institute of International Finance (IIF), said in a paper on December 1, dubbing the change in market sentiment towards the EMs “The Snapback.” 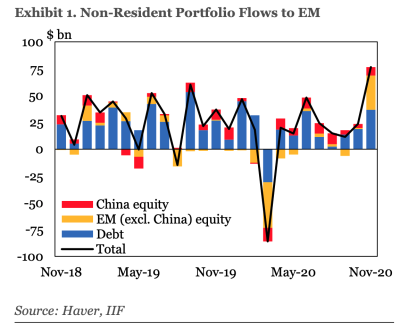 That is a turnabout, as the IIF capital tracker recorded historically large outflows from EM earlier this year when a perfect storm of trade wars, oil price collapse and pandemic combined to create one of the worst crises in living memory. During the recovery that followed the inflows were “tepid” according to the IIF.

But now the momentum is building as investors adjust to the new and dramatically improved circumstances. As bne IntelliNews featured in its cover story this month “Brighter days ahead”, sentiment has improved dramatically following the news that there are at least four viable vaccines that will be shortly available. But in addition, long-term changes in global capital flows following the election of Joe Biden as US president suggest that the dollar will start weakening and that is also always good for EMs. In the short term, the IIF predict that the inflows in the fourth quarter of this year will continue to be substantial as well. 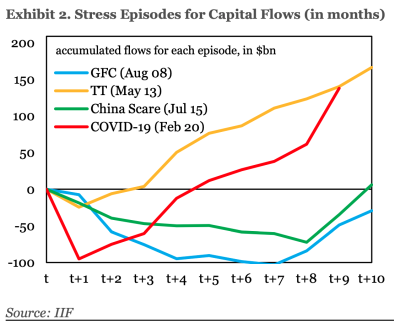 Another feature of the inflows is that they are mainly into equities, not bonds. As bne IntelliNews reported, a so-called Santa Rally seems to have begun in Russia, the traditional appreciation of the value of Russian equities based on seasonal factors that typically returns investors some 20% between September and January.

“Unlike previous months, the main explanation for the above-average performance in flows is mainly attributed to the recovery in Equity flows. Nevertheless, we see growing differentiation in flows to EM, with some markets still lagging and not capturing all the benefits of this rally, and other markets benefiting from high liquidity,” says IIF’s Fortun.

While investment into equities is making a difference, EM debt markets are also benefiting from the improving sentiment. Debt flows posted an inflow of $36.7bn; equities saw impressive figures with inflows of $39.8bn (of which $7.9bn were China inflows), reports IIF.

“Regionally, our data shows inflows across all regions, with EM Asia a clear winner, with inflows of $41.8bn,” says Fortun.

While Russia has not caught the full brunt of renewed interest in EM equity capital markets, it has been a big winner nonetheless. The Moscow Exchange registered record monthly outflows from retail brokerage accounts in November. Individuals sold RUB116bn ($1.5bn) worth of Russian stocks in November. This number suggests massive inflows from foreign investors, say analysts at BCS GM.

As bne IntelliNews reported, Russian retail investors have been piling into the local securities markets looking for an investment that pays better than the tradition bank deposits after the Central Bank of Russia (CBR) has continuously slashed the prime rate over the last few years to only 4.25% now. With inflation running at 4% in November and expected to end the year at circa 4.2%, bank deposit returns continue to be strongly squeezed.

The investment has seen the market rally, but since the middle of November non-resident investors have started heavily buying Emerging Markets (EMs).

“The numbers for November represent a departure from the trend seen over the last two years. However, the retail outflows are easy to explain. Vaccine-induced optimism has prompted global investors to start picking up cyclical assets, including Russian stocks. The RTS Index jumped 23% in November,” BCS GM said in a note. “For every buyer there needs to be a seller, so local investors appeared on the offer side. We estimate foreign inflows at $2.5bn during the month, as retail investors were not the only sellers: there was also a $1bn IPO. Overall, this development is good news for the market, as foreign purchases leave local retail investors with plenty of cash that they can deploy at any moment.”

The number of retail brokerage accounts continued to expand rapidly and now exceeds 8mn. This has further increased the capacity for local investors to buy more stocks.

And the money keeps coming. An estimate $5.6bn came into EM equities in the week to December 2, following a similar sum the previous week, according to EPFR Global data, as cited by BCS GM.

The largest share of the inflows to EM markets is headed to China, which traditionally attracts international investors interest first during an EM rally. Moreover, China’s economy is predicted to outperform in 2021, growing by 2% according to the latest World Bank’s Economic outlook released in October.

Russia has seen four consecutive weeks of net inflows, albeit more modest amounts than the other EM markets: $133mn (0.26%) in the first week of December following $156mn the week prior. That broke down to $81mn via EM funds, $49mn (0.52%) from Russia-dedicated funds and $22mn (0.32%) from global funds, according to EPFR Global data.

NEO: Why copper mining must clean up its act
8 minutes ago
The birth of a Kazakh banking empire: ATF Bank
17 hours ago
CEPR's action plan for Ukraine's wartime economy
1 day ago
Missiles or sabotage: What caused the explosion at the Russian airbase in Crimea?
4 days ago
Population decline to take Emerging Europe back to the early 20th century
4 days ago