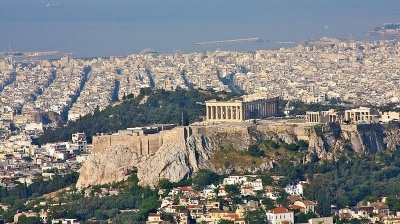 The average external debt-to-GDP ratio in the Balkans ranges from just 23.1% in Bosnia and 176.6% in the well-known case of Greece.
By Alexandru M. Tanase in London September 8, 2020

The current pandemic has brought the issue of debts, including external ones, to the centre of economic debates. The question of the external debt of any country in the world has been and will continue to be of maximum importance. It is one key macro-economic indicator reflecting the connectivity of a certain economy with the rest of the world and international capital markets. It is a fundamental legal and economic commitment made in the name of the current and future generations by the debtor countries to pay back at maturity the amounts borrowed. This very indicator is more crucial in the current uncertain times, exacerbated by the 2020 pandemic which strongly hit developed and developing countries as well.

The issue of debt is also obvious in the case of the countries forming what is historically known as the Balkan region or simply the Balkans. There is no need to underline the important role played by the Balkan countries during history. Winston Churchill himself was apparently puzzled by the visible historic role when quoted as saying that “the Balkans produces more history than it can consume”. Historians seem to be in agreement that the quote (apparently made in reference to Crete) was wrongly attributed to Churchill, but its expressivity is too tempting not to bring it to the fore. It says it all. Nowadays, this could be revisited and, mutatis mutandis, the question could be if the Balkan region is producing more external debts than it can really afford? 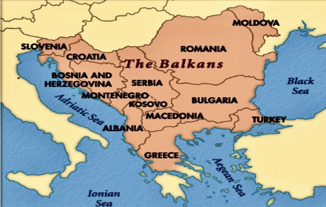 The current article will strive to give an answer to this question in a regional prospective. The historical evolution will be brought into discussion due to the relevant lessons learned. The case of the foreign debt of the former Socialist Federal Republic of Yugoslavia (SFRY) and its role in the dissolution of the former Balkan state could teach the inheritor states (see map) and other countries in the region too a very relevant lesson. It has been widely discussed that the SFRY’s external debt of $18bn accumulated until 1989 (over 70% of GDP computed according to the IMF-IFS Yearbook 1991), when the dissolution process started, played a major role in splitting the former Yugoslavia. There were of course may other factors at play such as cultural and living standard differences, local history and nationalistic sentiments, various religions, inter-ethnic rivalries, President Tito’s death in May 1980 and loose administrative arrangements thereafter, high unemployment, constant emigration and inequalities of wealth distribution among the seven inheritor states.

The Balkans — some key macroeconomic indicators

Turkey is not included in this group despite the fact that its European territory is, without any doubt, part of the Balkans. As Turkey has accumulated a large external debt ($431bn as of end-March 2020), the landscape would have been quite different. Meanwhile, some other countries in the region started to accumulate large external debts such as Albania, Greece, Moldova and Romania. In total the 12 countries owe almost €600bn according to the latest available figures (2019 or end-March or end-June 2020, where available). This led to an average external debt-to-GDP ratio of 86.5% which could easily be considered as characteristic of Highly Indebted Countries (HIC). Like any average, this level could be misleading as it ranges between 23.1% in the case of Bosnia and 176.6% in the well-known case of Greece. It could be easily stated that Greece was saved from an external debt crisis by the European Union (EU) and the international financial institutions (IFIs) in May 2010 (first bail-out) and in February 2012 when a large discount (debt write-down or the so-called “haircut”) of 53.5% was granted by creditors. Even with all these generous measures, the target of reducing debt-to-GDP ratio to 120% by 2020 was not achieved due to many reasons which would deserve a full separate analysis. The restructuring process of Greece's external debt was painful and lasted many years, but the consequences could have been much worse without the proper support of its creditors. The ghost of the former Yugoslavia’s external debt and the more recent struggle of Greece are still haunting the Balkans! 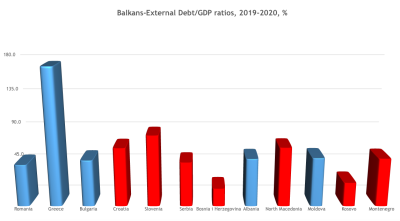 Some other cases are also very illustrative (see graph). Both Romania and Moldova started their transition to market economies in 1990 and 1991, respectively, with zero external debts. Romania promoted a vigorous policy of reducing its external debt which was achieved by March 1989, while Moldova agreed not to participate in the sharing of both assets and liabilities in the aftermath of the dissolution of the former Soviet Union in 1991. However, both countries lost this potential advantage soon during the early days of transition. According to the latest figures published by the National Bank of Romania and National Bank of Moldova, respectively, Romania’s external debt reached a very high level of €111.5bn as of end-June 2020 (estimated at over 50% of GDP, depending on the GDP decline this year) and Moldova surpassed the level of $7.6bn as of end-March 2020 (over 63% of GDP). Albania also increased its stock of foreign debt from €7.6bn as of end-2015 to €8.2bn as of end-March 2020.

With a few minor exceptions, all the Balkan countries accumulated large external debts which could have been otherwise manageable in normal times. The problem is that the world is going through very uncertain times. The commercial war between the US and China is simply unpredictable in the short term. Also, many developed countries, including the EU, have implemented bold monetary programmes of quantitative easing (QE) and keep their interest rates at historical low levels (US: 0-0.25% for federal rate and more recently a very flexible approach of inflation target, UK: 0.10% and the EU: -0.50%) which in the short term may have a positive impact but in the longer term will exacerbate inflation and erode the savings of millions and millions of depositors. Political uncertainties related to elections in the US and the actual exit of the UK from the EU on January 1, 2021 are not helping the world, including the Balkan countries, as the markets will change post-Brexit. And on top of everything, the world and the twelve Balkan countries are going through a pandemic with no equivalent in history and with no immediate end in sight.

The obvious question under such difficult circumstances is what else can these countries do? In the very short term, not that much could be done as the financial costs of the pandemic should be paid, but in the longer term the prudent management of external debts is crucial. All the central banks should have clear strategies on how to control the evolution of debt-to-GDP ratios. Some of them used to warn their respective governments from time to time that they are borrowing too much, too quickly. Such a relaxed attitude will not help. The central banks together with the IMF and other IFIs should structure financial programmes with clearly defined targets for the evolution of external debts. In some cases, sharp restrictions on external borrowings will be needed if future financing crisis are to be avoided, especially in those cases where the debt-to-GDP ratios approach 90-100%. Measures to stimulate domestic savings and an increased flow of remittances from abroad (on which countries are dependent) are overdue.

Coming back to the original question of repaying the increasing external debts, the answer is quite different. The EU countries in this group (Bulgaria, Croatia, Greece and Romania) will benefit from the EU support from the €750bn special recovery fund to fight the pandemic and from other structural funds. As such, with prudence and good management they will succeed to stay afloat. However, for the other countries in the group, it will be more complicated. Like many other times in its tumultuous history, the Balkans will remain at the crossroads of powerful geopolitical interests. Uncertain times lie ahead indeed.

Alexandru M. Tanase is an independent consultant and former associate director, senior banker at the EBRD and former IMF advisor. These are personal views of the author. The assessments and views expressed are not those of the EBRD and/or of the IMF and/or indeed of any other quoted institution. The assessment and data are based on information as of end-August 2020.

North Macedonia, Albania and Serbia to invite Kosovo to join mini-Schengen on October 30

Will the up-coming Biden Presidency be good for Ukraine? The answer is yes, but there are questions that must be answered.

The deal left unmentioned critical issues like the final status of Nagorno-Karabakh and Turkey’s role in implementing the ceasefire.