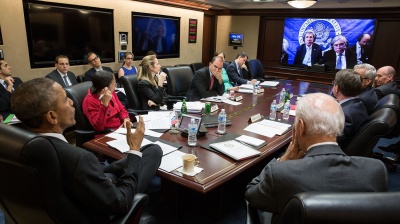 March 2015: Joe Biden sits next to then US president Barack Obama's right in the White House Situation Room during a secure video conference call with a US negotiating team in Lausanne, Switzerland, that was in talks with the Iranians to formulate the nuclear deal.
By bne IntelIiNews January 19, 2021

Joe Biden has made it quite plain that as US president he wants to take Washington back into the 2015 nuclear deal between Iran and major powers. The key question at this point might be: will his administration accept that it needs to drop Donald Trump’s sanctions against Iran before Tehran returns to full compliance with the accord, or will it insist on that compliance being restored before it scraps the sanctions?

Iran – or at least the hardliners who speak loudest on this issue – has in recent weeks taken the line that Biden must simply move straight ahead with removing the Trump sanctions with no pre-conditions. The Iranians claim that they are not interested in how quickly the US returns to the nuclear deal (formally the Joint Comprehensive Plan of Action, or JCPOA, drawn up to keep Iran’s nuclear development programme purely civilian in return for a shield against major sanctions) although that is perhaps a little disingenuous given how such a move would boost their Trump-strangled economy; they simply want, they say, to see Biden incinerate sanctions that should never have been introduced in the first place by Trump because, as UN inspectors confirmed around the time that Trump unilaterally pulled the US out of the multilateral JCPOA in May 2018, Iran had never breached the nuclear agreement prior to the US exit. On the other hand, Tehran says that should Biden do away with the sanctions, it will have no qualms about rectifying the breaches of the deal that it has made since Trump ended US participation in the JCPOA.

The JCPOA is regarded as the signature foreign policy achievement of Trump’s predecessor Barack Obama. Moreover, as US vice-president, Biden served as Obama’s main promoter of the accord with US lawmakers once the deal was brokered, lobbying sceptics in Congress for hours on end, underlining Obama’s pledge that America would always do everything in its power to stop Iran from ever developing nuclear weapons, if diplomacy failed. Biden no doubt dearly desires to re-establish the primacy of the JCPOA as he sets out to cleanse US foreign policy and diplomacy of Trump’s legacy.

He has certainly picked a foreign policy team that has no lack of familiarity with the nuclear deal.

Biden’s pick for Deputy Secretary of State, Wendy Sherman, was Obama’s lead US negotiator for the protracted talks that led to the agreement. Besides tapping Sherman for his administration, Biden has also called back William Burns, who led secret early JCPOA talks with Iran in Oman, as his CIA director. And he’s selected Iran negotiators Anthony Blinken and Jake Sullivan as his intended Secretary of State and National Security Adviser respectively, among other 2015 Iran players.

Trump’s line has been that Iran must agree to further concessions on its nuclear development programme, major restrictions on its ballistic missile development and refrain from arming allied militias across Middle East conflict zones if it wishes to reach a Nuclear Deal Mark II agreement with the US and be released from the sanctions noose. Israel and the Saudis have backed Trump to the hilt on this, but there is no sign that Biden will see such a road as the way forward.

More likely is that Biden will push for new deals with the Iranians in these areas once the JCPOA is revived with full US and Iranian participation. Getting back into the original deal “is the floor and not the ceiling” for the Biden administration on Iran, a person familiar with the incoming administration’s thinking on the matter was on January 18 quoted as saying by The Associated Press, adding: “It doesn’t stop there.”

Given Trump’s crude breach of diplomatic convention in pulling the US from the multilateral accord despite Iran’s full compliance with it, the hardliners in Iran will have an easy time in making the case that agreeing to Biden’s demand for new concessions would be foolhardy when the new US president’s successor could once more rip up commitments and promises.

“His ability to move the needle is ... I think hampered by the doubt about America’s capacity and by the scepticism and worry about what comes after Biden,” the AP, in the same article on the JCPOA, cited Vali Nasr, a professor at Johns Hopkins University School of Advanced International Studies, as saying.

One worry in Iran policy will always be that Israel could take matters into its own hands. Reuters cited an Israeli newspaper, Israel Hayom, as reporting on January 14 that Tel Aviv was revising military options for a possible clash with Iran as Prime Minister Benjamin Netanyahu’s government braces for differences with the incoming US administration on the Iranian nuclear programme.

Israel, in underlining the gravity of the situation, often points to Iranian rhetoric that Israel is a state that should not exist.

Israel Hayom reported that the military is crafting three options to “undermine Iran’s nuclear efforts or, if need be, counter Iranian aggression, which will soon be presented to the government”.

The paper did not cite any sources, but it went on to quote Israeli Defence Minister Benny Gantz as stating: “Israel needs to have a military option on the table.”

Israeli Finance Minister Israel Katz lately acknowledged on Army Radio: “There are disputes [with Biden] regarding the perspective on Iran, and of course that will prove challenging.”

Israeli Intelligence Minister Eli Cohen, meanwhile, was reported by Reuters as telling Ynet TV that the Netanyahu government was not yet in formal dialogue with the incoming Biden administration. But asked if Israel was trying through informal channels to sway Biden on Iran, Cohen said: “Yes. There are efforts.”

Sunni Muslim Saudi Arabia, which like Israel backed Trump all the way in his “maximum pressure” assault on the Iranian economy, is showing signs of nervousness ahead of a Biden presidency that could improve the prospects of its Shi’ite Muslim arch-rival across the Gulf and show some backbone in opposing Riyadh’s rotten human rights record.

Within the past few weeks, the kingdom consented to an Arab deal to reconcile itself with blockaded Qatar, announced voluntary cuts to Saudi crude output to help stabilise markets and upped the tempo on an economic diversification plan – all measures likely to go down well with the Biden team.

A more amenable Saudi Arabia is pushing to stop the JCPOA from coming back to the table. Saudi Foreign Minister Faisal bin Farhan told CNBC in November that Riyadh wants to partner with the Biden administration on a potential new nuclear pact which he said could be labelled “JCPOA++”, to include Iran’s ballistic missiles and “malign activity”.

Russian government may cut borrowing this year by RUB0.5 - 1 trillion over US sanctions fears
23 hours ago
Sanctions risk on Russia is over-priced
2 days ago
Forbes launches eco-rating of Russian companies
4 days ago
Kyrgyzstan: Kumtor’s fate uncertain once more
6 days ago
Russia's paper and pulp company Segezha is tapping Russia's "green gold"
7 days ago