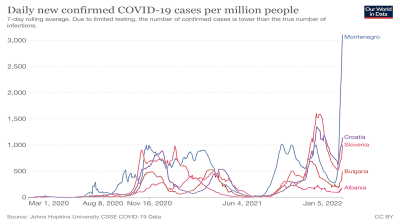 The Omicron variant of the coronavirus (COVID-19) is spreading across Southeast Europe where the number of new cases is rising sharply, reaching all-time highs in some countries in the last few days. The situation is worsened by to the low vaccination rate.

In Bulgaria, the authorities reported 6,766 new cases of coronavirus in 24 hours on January 6, almost reaching the peak of the previous wave of the pandemic in the autumn. A day earlier, the new cases stood at 6,252. The figures were significantly higher compared to the previous days when new cases were around or below 2,000 per day.

The country’s health ministry noted that more than 70% of all new cases were among people who have not been vaccinated against coronavirus.

Despite the surging numbers, so far the authorities do not intend to tighten restrictions within the country and are trying to persuade people to vaccinate. However, the restrictions for entry in the country are being tightened as of January 7. People coming from countries that are in the red COVID-19 zone can enter Bulgaria if they have a green coronavirus certificate proving they have been fully vaccinated or recovered from the virus, as well as a negative test for coronavirus carried out within 72 hours before entry.

Meanwhile, Bulgaria’s ruling coalition has split over an initiative to introduce mandatory green coronavirus certificates for people entering parliament. On January 5, parliament’s committee decided that the document will become mandatory after voting by MPs. However, a day later, Toshko Jordanov, the head of the parliamentary group of There Are Such People (ITN) – a member of the ruling coalition – warned that his party would not back that.

In Croatia, the number of new cases posted a new record high on January 6, going beyond 9,000 in 24 hours, after passing the 8,500 mark a day earlier. The cases were particularly high in Split-Dalmatia county, followed by the capital Zagreb. One fifth of the cases are in these two areas.

Prime Minister Andrej Plenkovic has commented that most likely the Omicron strain is widespread in the country already and urged unvaccinated people to get the jab as soon as possible and for those who have been vaccinated to receive a booster dose.

So far, 63% of the adult population has received two doses, while 543,000 people have had boosters.

In Montenegro, the number of new cases has also surged. According to data from the Institute for Public Health, more than 2,800 new cases were registered on January 5 in the country of just over 620,000 people. As the country is celebrating Orthodox Christmas, it is likely that the number of registered new cases will be lower at the end of the week due to the lower number of tests.

In an attempt to contain the spread of the virus, the government tightened the restrictions for entry in the country as of beginning of January. People can enter Montenegro if they have a certificate proving that they have been fully vaccinated with one or two doses no more than six months ago or if they have recovered from coronavirus within the past six months. They will be obliged to also present a negative test for coronavirus along with the certificate.

Albania reported a record 1,236 cases on January 5, only to surpass that level with an increase to 1,648 on January 6.

A total of 3,829 people tested positive for coronavirus in Slovenia on January 6, an increase of 124% on the same day a week ago, data from the National Institute of Public Health shows.

550 people are being treated in hospitals, 161 of them in intensive care. The youngest patient in an intensive care unit is just 21 years old. Five more people died of COVID-19 on January 5.

Tourists stay away from Montenegro as prices rival Cote d’Azur