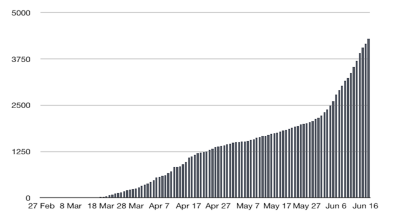 Over 50 doctors and nurses were brought to Skopje hospitals from other towns in North Macedonia or other health facilities in the capital to help the medical staff coping with the increased number of coronavirus (COVID-19) patients in the last few days, Health Minister Venko Filipce said on June 17.

In the last 24 hours, a record high 193 new COVID-19 cases were reported in North Macedonia, which is the biggest daily figure since the start of the epidemic at the end of February. The total number reached 4,482 as of June 17, while 210 have died so far. Since the beginning of June, the number of new cases started to increase rapidly with the daily figure at around 150, and rarely dropping below 100.

"This is the biggest health crisis in our country so far. We have never faced such a health crisis," Filipce said.

As well as the two main hospitals in Skopje that admit coronavirus patients, which are the Infectious Disease Hospital and the former military hospital, now known as 8th September, the ministry opened a temporary coronavirus hospital to add 72 beds. The first three patients were admitted there on June 16.

Filipce expects in the next seven days the number of admitted patients to be higher than those already enrolled, but after this period the number of hospitalised patients is expected to decrease.

The minister added that the medical staff is tired, after a four-month battle with the coronavirus, and thus urged citizens to respect the preventive measures, such as wearing masks, social distancing and using disinfects in order to prevent the spreading of the virus.

The number of hospitalised patients currently amounts to 330 in hospitals across the country, but that number is growing on a daily basis.

The biggest number of infected are in Skopje, mostly in the Cair municipality, where most of the patients were infected during family gatherings.

The European Bank for Reconstruction and Development (EBRD) said on January 4 it is providing two loans of a combined €3.5mn to ProCredit Bank Skopje to support small and medium-sized enterprises ... more

The European Bank for Reconstruction and Development (EBRD) is providing a €1mn loan to North Macedonia’s Komercijalna Banka to support green investments in the country. The loan is provided ... more

The Higher Administrative Court in Skopje ruled in favour of Canada-based Euromax Resources against the North Macedonia economy ministry’s decision to terminate the permit for the gold and copper ... more