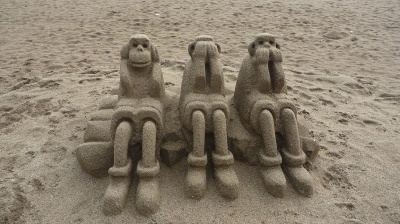 Is there more than one wise monkey in Turkmenistan?
By bne IntelIiNews April 1, 2020

Plainclothes agents in Turkmenistan’s capital Ashgabat have reportedly been nabbing people uttering the word “coronavirus” or discussing the pandemic in public.

RFE/RL’s Turkmen Service reported the worrying development in the remote, tightly controlled country, which has an official coronavirus (COVID-19) infection count of zero.

The word "coronavirus" is also said to have disappeared from newly published state brochures on disease prevention in authoritarian Turkmenistan, which borders Iran, a country that has experienced one of the world’s worst COVID-19 outbreaks. Instead of instructing citizens on ways to prevent the spread of the virus, altered brochures replace the word "coronavirus" with "illness" and "acute respiratory diseases", among other terms.

An anonymous source in Turkmenistan’s Ministry of Health and the medical industry has told independent news website turkmen.news that one Turkmen died after contracting the virus in the ex-Soviet nation’s Lebap Region.

RFE/RL reported earlier in March that at least two Turkmen had tested positive for the virus at a hospital near Ashgabat, citing claims made by anonymous medical sources. The claims actually amounted to the first report of coronavirus infections in Central Asia, of which there are now officially several hundred, mainly in Kazakhstan and Uzbekistan.

Turkmen officials have reportedly been enacting some measures against the spread of the virus, such as discouraging public gatherings and circulating the (now altered) flyers warning citizens to stay alert for respiratory infections.

Separately, it emerged on April 1 that Turkmenistan has suspended the movement of freight traffic via its territory due to the pandemic, according to a foreign ministry document posted online by a Kazakh businessman. Reuters on April 1 confirmed the validity of the document with two anonymous diplomatic sources in Turkmenistan.

The document states that freight transport, including transit shipments, is “restricted” for the entirety of April. No exemptions are made.

Turkmenistan had already closed its borders to passenger traffic.

CAUCASUS BLOG : What can Biden offer the Caucasus and Stans, all but forgotten about by Trump?
COVID-19 and Trump’s indifference helped human rights abusers in 2020
OUTLOOK 2021 Turkmenistan