Following the high-profile divorce between Russia's largest, state-owned lender Sberbank and tech giant Yandex earlier this year, the future of the bank's partnership with another local tech company, Mail.ru Group, is now also in danger of collapsing.
By Vladimir Kozlov in Moscow November 24, 2020

Following the high-profile divorce between Russia's largest, state-owned lender Sberbank and tech giant Yandex earlier this year, the future of the bank's partnership with another local tech company, Mail.ru Group, is now also in danger of collapsing.

A $1.6bn joint venture between Sberbank and Mail.ru, which is best known as the owner of Russia's most popular social network VKontakte, may not go ahead due to management and cultural clashes that could lead to yet another divorce, Russian and global media have reported, citing sources close to the two companies.

Last July, Sberbank and Mail.ru announced a joint venture, in which they would combine their ride-hailing, food apps and delivery services in a bid to create the country's top platform in mobility and food tech.

The two companies' investment in the project has reached RUB12bn ($160mn) so far, and Mail.ru was able to raise another $600mn that the company planned to spend on further acquisitions.

The joint venture, which includes the ride-hailing app Citymobil and the food-ordering app Delivery Club, was largely considered to be a rival to Yandex' similar services and one of the main reasons for the recent divorce between Yandex and Sberbank.

Among other issues that led to the collapse of the collaboration between Sberbank and Yandex, reportedly, were arguments over which partner would be in charge, given that both sides were supposed to have equal stakes.

Now the same issues have surfaced in the Mail.ru and Sberbank tie-up. The two companies are already discussing splitting the joint venture up, but so far they've been unable to decide on how exactly they will divide up the assets.

One of the major issues apparently is that both companies have recently been focused on building ecosystems operating across various services and industries, and Sberbank's ambition to re-emerge as a major player in Russia's tech sector, as opposed to just the country's "most innovative bank," makes it a direct competitor to Mail.ru in several areas.

Sberbank, led by CEO German Gref, is apparently inspired by the success of China's "SuperApps" WeChat and Alipay. But when it comes to the joint venture with Mail.ru, the two sides' interests are likely to be different.

Predictably, Mail.ru wants to see VKontakte, with its 73mn users, as the basis of the joint venture, while Sberbank has insisted on relying on its 95mn strong customer base instead.

Similarly, Sberbank was unhappy with demands from Mail.ru that VKontakte's login be used as the basis for the joint venture's apps, while Mail.ru chafed at the idea of exclusively using Sberbank's payments.

Meanwhile, the joint venture does not include Mail.ru’s partnership with China's AliExpress, and Sberbank's talks about acquiring a stake in Ozon, Russia’s second-largest e-commerce company, fell through earlier this year when Ozon chose to go for an IPO in the US instead.

Also, as Sberbank and Mail.ru are doing well in their main operation areas, the joint venture between the two companies has not yet turned a profit. Delivery Club lost RUB6.5bn this year, while Citymobil's losses were reported at RUB7.4bn.

Both services remain loss-making despite doubling and tripling their revenues year on year respectively in the third quarter, according to Sberbank, which also recently acquired digital media company Rambler, another loss-making asset with a net loss of RUB1.5bn last year.

Finally, the Russian government, which owns Sberbank, seems to be not exactly happy about the lender's venture into the tech domain. Although Sberbank said that it had spent just $1bn on the joint venture with Mail.ru and the acquisitions of Rambler and the mapping app 2GIS, which is small in comparison with the lender's assets and revenues, the Finance Ministry reportedly intends to take a tougher approach to Sberbank's tech spending.

This article is par 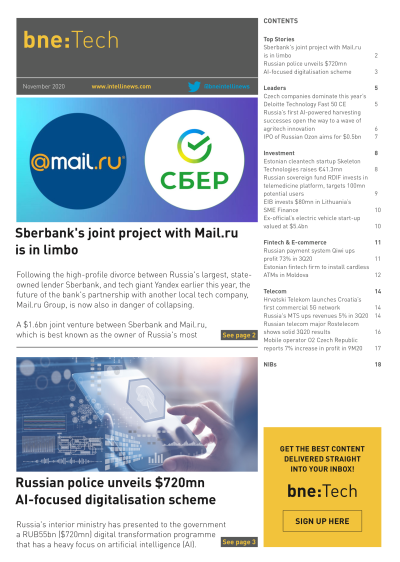 t of bne IntelliNews coverage of technology, blockchain, fintech, cryptocurrencies and the new economy. Sign up for the free monthly newsletter bneTech here, or read more tech stories on the website here.