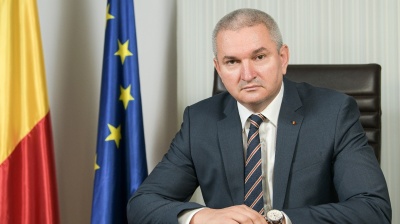 Nicu Marcu was appointed by the parliament with a mandate to clean up the ASF after media reports of irregularities and conflicts of interest.
By Iulian Ernst in Bucharest January 13, 2021

Employees of Romania's financial markets regulator, the Financial Supervision Agency (ASF), may have deliberately included serious errors in official documents presented to the board, the regulator confirmed, when firing the director of its regulatory and authorisation department.

In recent months, more precisely since the current ASF president Nicu Marcu took office, several employees have either left the authority, taken a step back or been fired for irregularities in their activity. Marcu, who was appointed by the parliament with a mandate to "clean up" the authority, has repeatedly promised that the ASF will reform.

In the latest step, the ASF fired the director of its regulatory and authorisation department, Mihaela Cojocaru, on January 12, according to Profit.ro.

There are suspicions that errors in official documents were aimed at helping the supervised entities targeted by the documents to challenge decisions that would have otherwise impacted them, Economica.net reported.

ASF management has started an internal investigation and has also notified prosecutors at the Directorate for Investigating Organised Crime and Terrorism (DIICOT).

However, the irregularities at the agency go beyond Cojocaru’s department, and several other directors and employees of the ASF are on the list of suspects.

According to ASF spokesperson Daniel Apostol, at the beginning of Marcu’s tenure, irregularities related to the capital market sector were identified. Subsequently, shortcomings in the insurance sector were also found.

"I can confirm that the media reports are true. The current ASF management initiated an extensive process of evaluating the authority's entire activity, as well as the topics that have undermined the credibility of ASF over time. Several months ago, the press reported all kinds of irregularities or situations that involve at least conflicts of interest by some employees of the authority," stated Apostol, quoted by Ziarul Financiar.

Russia's Sberbank makes a move in e-commerce with Goods.ru deal
3 hours ago
Protests sweep Poland after government launches near-total abortion ban
9 hours ago
Putin strikes a conciliatory tone in his World Economic Forum speech but warns of an “all against all” fight if tensions are ignored
10 hours ago
Hungarian government plans to regulate big tech to stop 'ban' on rightwing views
10 hours ago
China to be excluded from Czech tender for new Dukovany nuclear unit
10 hours ago