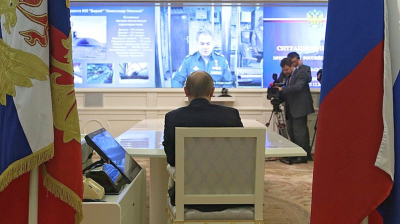 British Foreign Secretary Philip Hammond said that the results of the referendum are likely to have pleased the Russian president,
By Jason Corcoran and Anna Kravchenko in Moscow June 24, 2016

Schadenfreude amongst Russia leaders and the country's commenteriat went into overdrive after Britain's historic vote to leave the European Union.

Supporters of Brexit won with 52% of the vote against 48% of the citizens supporting the union membership. The turnout exceeded 72%. More than 33.5mn people took part in the vote. Prior to the vote, analysts from Russian state-run investment banks suggested that a decision to leave, or Brexit, would trigger other referenda around the EU and the breakup of the 28-member state political-economic group.

Having refrained from comment on the referendum for months, President Vladimir Putin couldn't resist a 'serves-you-right' dig at the British leadership as the Brexit result overshadowed his current trip to China. Speaking en route in the Uzbek capital Tashkent, Putin said "the very organisation of the referendum and the subsequent results are nothing more than overconfidence of the UK leadership and its casual attitude to the settlement of the questions momentous for the country and Europe as a whole", TASS reported.

In the wake of the vote, Russia's business ombudsman said it will loosen American influence in Europe and could lead to a Russia-led united "Eurasia" within a decade. Boris Titov, an advisor to Putin on business people's rights, said the long term impact of Brexit was to remove "Anglo-Saxon" influence from Europe.

"It looks like Britain is quitting the EU. Will they play the song 'It's all Putin's fault?' Or will they analyse the problems of the EU this time?" tweeted Vladimir Soloviev, a popular television presenter who is generally considered loyal to the Kremlin line.

These comments reflect how Britain is widely seen in Moscow as a hawkishly anti-Russian power that has thwarted Kremlin efforts to rekindle relations with some countries in mainland Europe.

The UK has been one of the main drivers of the EU sanctions regime against Russia following Moscow's 2014 annexation of Crimea and involvement in the conflict in east Ukraine. Politicans and officials from Italy, France and Germany have called for the sanctions, imposed over the Kremlin's involvement in the Ukraine war, to be loosened or dropped.

Early on June 24, before Putin commented, his spokesman Dmitry Peskov said the Kremlin hopes Russia's relations with the United Kingdom will now improve. "We hope that the understanding to build good relations with our country will prevail in the new realities," Peskov said, describing Russia's current ties with Britain as "quite complicated".

As for the future of the EU after the watershed vote, the spokesman said only that "Moscow is interested in the EU being economically strong, prosperous, stable and predictable." The Kremlin does not link Brexit with possible easing of sanctions against Russia, Peskov added.

But now Britain has voted with its feet, analysts at the state-controlled investment bank Sberbank CIB said the unified stance on sanctions may now be broken.

"One possible silver lining for Russian financial markets is that an eventual UK departure from the EU could shake the EU's unanimous support of sanctions on Russia," analysts led by Andrey Kuznetsov wrote in a report on June 24. "Among the EU's three unofficially leading members - the UK, Germany and France - the UK government has been the staunchest supporter of sanctions and faces the least domestic political resistance."

The Kremlin had been careful in recent weeks to keep a lid on its feelings towards a possible Brexit. In mid-May, Peskov raised his eyebrows about Prime Minister David Cameron's statements that the Russian leader "might be happy" with a British withdrawal from the EU.

"We have already got accustomed to that the Russian factor is one of the persistent tools in the US election campaign. But the use of the Russian factor or the factor of President Putin in the Brexit issue is new for us," Peskov said, noting that Moscow is interested in building relations with EU countries, both with the Union itself and "individually".

British Foreign Secretary Philip Hammond said that the results of the referendum are likely to have pleased the Russian president, Britain's The Daily Telegraph reported.

The former US Ambassador to Russia Michael McFaul called the Brexit win the victory for Putin. "Not always, but tonight is a giant victory for Putin’s foreign policy objectives. Give him credit," McFaul Brexit vote will be positive for the UK over the longer term and may trigger other referenda across the EU.

MacKinnon, a former special adviser to the UK Treasury, claimed the European Union has not been an economic success story and Britain would be better off doing separate trade deals with Russia, China and the US.

After the results came in, MacKinnon said the vote reflected "discontent with a dysfunctional monetary union and a EU political elite that seems out of touch".

Meanwhile, Alexei Pushkov, the head of the State Duma's foreign affairs committee, said EU member states will be against carrying out any further referendums after Brexit.

"After the referendum in the Netherlands and Britain, the European ruling elites will be against conducting them: Public opinion is dangerous for their political goals," Pushkov wrote on Twitter.

Elvira Nabiullina, governor of the Central Bank of Russia (CBR), said her staff have had discussions on how to deal with the aftermath of a possible Brexit but don't see any risks for the Russian economy. However, Herman Gref the head of Russia's largest bank Sberbank, warned Brexit could derail Russia's recovery and hammer stocks and bonds.

Meanwhile, Gazprombank on June 24 argued that compared with other EM peers, Russia is well-positioned to withstand volatility brought about by the Brexit vote, due to "improved fundamental position and resilience to external shocks", the bank said in a note.