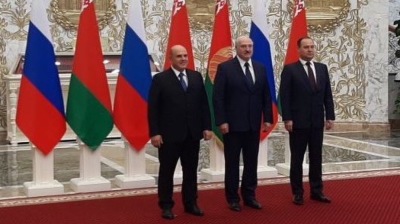 The Kremlin is taking advantage of Belarus' self-appointed president Alexander Lukashenko's weakness to force him into a "Rublezone" deal / wiki
By Ben Aris in Berlin September 3, 2020

Russian Prime Minister Mikhail Mishustin unexpectedly arrived in Minsk with a large delegation of top Russian ministers on September 3 to work out the details of a deal that will create a “Rublezone” Union State.

The Kremlin is taking advantage of Belarus' self-appointed President Alexander Lukashenko's weakness as he faces down the opprobrium of his people after he managed to alienate almost the entire population of Belarus with the mass falsification of the August 9 presidential election.

Lukashenko is now clinging to power, entirely supported only by the security forces and a promise of military and financial help from the Kremlin. Russian President Vladimir Putin said he was willing to send a special military unit to quell the protests “if necessary” on August 27 that totally changed the dynamic of the situation in Belarus and has bolstered Lukashenko, who was close to being swept from power.

Lukashenko has since relaunched a crackdown and intimidation programme to try to break the weekly mass protests against him. The day before Mishustin arrived in Minsk parents were told at the start of the new school year that they could have their children taken away under a “dysfunctional family” law if they joined the protests.

Mishustin brought several high ranking ministers with him in a trip that was not announced to the public in advance, nor had any official explanation of the trip been given by the Kremlin at the time of writing.

Lukashenko was on his regular stochastic form, telling the deadpan-faced Mishustin that Minsk had “intercepted a call between Merkel and Warsaw in which [German Chancellor Angela] Merkel's words were proven to be fake.”

Merkel was outraged by the poisoning of the anti-corruption blogger and opposition activist Alexei Navalny with Novichok last week; he is now in a coma in a Berlin hospital. She said there was “unequivocal evidence” that the Russian nerve agent Novichok had been used and demanded the Russian government conduct “a full investigation” and “bring those responsible to account.” It was some of the most aggressive language the chancellor has ever used against Russia in the many conflicts between Berlin and Moscow.

Lukashenko probably thought he was being helpful in the Kremlin’s fight to deflect criticism for the poisoning of Russia’s top opposition figure. He went on to say that Merkel’s words were to “repel Putin's desire to poke his nose into the Belarus affairs," and added: "Do you understand how Jesuitically these people act?”

Now that the Kremlin has his back, Lukashenko consolidated his grip on power on September 3 by reshuffling some of his top personnel.

He has replaced the State Secretary of the Security Council of Belarus and the Chairman of the KGB. Valery Vakulchik was appointed State Secretary of the Security Council and Ivan Tertel was appointed chairman of the KGB of Belarus, leaving the Committee for State Control, which was taken over by Vasily Gerasimov as acting head.

Tertel is a loyal Lukashenko lackey and was the man that ordered the arrest of ex-banker and leading opposition candidate Viktor Babariko in July that kicked off the first street protests. His promotion to the head of the KGB argues that Lukashenko intends to crack down even harder from here.

The Kremlin has been pushing for a completion of the Union State ever since Lukashenko signed the framework agreement in 1999. Russia has also been pushing for a military base in Belarus that would form a forward position against NATO forces and go some way to reversing NATO’s expansion of the last two decades. Lukashenko has resisted both initiatives, using them as bargaining chips to wring more money and concessions out of Moscow.

But now the former collective farm manager has backed himself into a corner, it looks like he is being forced to make concessions.

Earlier this week Lukashenko talked about a single entity “from Brest to Vladivostok.” This phrase is very telling, as Putin’s overriding foreign policy goal is to create a single market from “Lisbon to Vladivostok.”

Unable to join the EU, Putin created the Eurasia Economic Union (EEU) which is a copy of the western trade club and designed specifically to be compatible with the EU's regulations, Tatyana Valovaya, the architect of the EEU, told bne IntelliNews in an interview.

"We were trying to copy the European Union," said Valovaya, who did much of the negotiating for the Russian side in establishing the EEU. "We are extremely grateful to the EU for its problems, as they have taught the lessons we need to make the Common Economic Space a reality."

Putin’s strategic fear is that Russia will be overshadowed by China’s rise in the coming decades, and the country wants to become part of the European economic block or else face irrelevance in the next century.

Putin has pushed this idea in Brussels, and both Merkel and most recently French President Emmanuel Macron have trotted out the “Lisbon to Vladivostok” line when they want to be nice to Moscow.

Macron mentioned the phrase most recently during a video conference with Putin on June 26 on the theme of more European co-operation.

"The crisis we are living through and other regional crises demonstrate the importance of European space in a broader sense of the words, from Lisbon to Vladivostok," he said. "It is a real space of co-operation and peace. We understand the importance of it and the challenges we are facing."

The Union State with Belarus is another step towards this goal, as it will create a clone of the Eurozone between Russia and Belarus with an open board, complete freedom of movement of goods, capital and labour as well as common currency.

The Navalny poisoning seems to run counter to this narrative, but perhaps that is the point. The incident has reignited the anti-Kremlin rhetoric and among the calls for counter measures has been the idea to block the completion of the Nord Stream 2 gas pipeline, which has been redoubtably backed by Merkel.

Blame for the poisoning has already been laid at Putin’s feet, but as Mark Galeotti, director of the consultancy Mayak Intelligence and also an honorary professor at UCL School of Slavonic & East European Studies and bne IntelliNews contributor, pointed out in his blog, it could have been anyone. Navalny is Russia’s top investigative journalist in addition to being a political activist and has exposed the wrongdoing and ill-gotten gains of a lot of very powerful people.

One theory – and there are currently many theories doing the rounds – is a hardline faction is unhappy with Putin’s proposed reconciliation with the West and creation of an economic union. The use of Novichok as a poison was designed specifically to cause exactly the “shit storm,” as Merkel recently said using the English word, it has done to make this reconciliation, also being pursued by Macron, as difficult as possible.

As Galeotti also pointed out, the whole episode in Omsk, where Navalny’s plane made an emergency landing, was chaotic as the doctors there issued one contradictory statement after the other, which didn't smack of a well planned, Kremlin-sponsored, assassination attempt. Maybe the most conclusive proof that the Kremlin didn't organise the poisoning is that it failed to kill Navalny, as several senior Russian politicians have pointed out.

Putin himself has been entirely silent on the whole Navalny affair, whereas the normal response would have been for the government to condemn the attack and launch an investigation. Likewise, when opposition politician Boris Nemtsov was gunned down outside the walls of the Kremlin in February 2015 Putin disappeared for two weeks and said nothing. When it comes to scandals involving the security forces Putin never says anything. Even following the arrest of Russia’s most famous fund manager, the US-born Michael Calvey, by the Federal Security Service (FSB), the only comments Putin made on the affair were comments “leaked” from a closed meeting with security officials that were remarkably neutral. Like Lukashenko, Putin remains entirely dependent on the security forces to remain in power.

“What it means if you are close to Putin [is] you quite literally have a licence to murder,” Galeotti said in his blog.