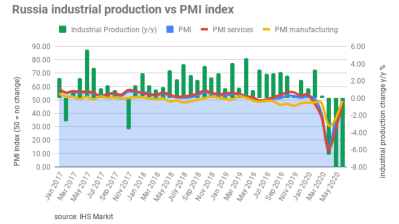 Russia's manufacturing PMI has spent 14 months under the no-change mark of 50 -- its longest negative run ever
By bne IntelliNews August 3, 2020

As followed by bne IntelliNews, at the end of lockdown in June the manufacturing PMI leapt from the deep contraction to 36.2 in May, recovering almost all lost ground as the economy came to a standstill due to the coronavirus (COVID-19) epidemic.

But in July the reading remains below the 50.0 no-change mark, which indicates a deterioration in operating conditions across the Russian manufacturing sector, and one that was stronger than that seen in June.

"Although the deterioration was much less severe than that seen in April, it signalled a step backwards for goods producers, as demand conditions faltered," the IHS report reads.

"The Russian manufacturing sector took a step back in July, as new orders struggled to maintain momentum," the IHS Markit economist Siân Jones commented, adding that despite the expansion of the output, manufacturing sales fell back into contraction territory amid challenging demand conditions and hesitancy among clients.

Nevertheless, some firms were buoyed by a recent pick-up in production schedules, as signalled by an improvement in output expectations to a six-month high.

"Russian goods producers remained upbeat regarding the outlook for output over the coming year, despite signs of weak customer demand," according to IHS Markit. The degree of confidence picked up to a six-month high in July amid reports of investment in product development and hopes of a return to pre-pandemic output levels over the long term.

"While it is encouraging to see confidence improving among goods producers, our latest forecast is a 6.4% annual contraction in industrial production in 2020 and a slow recovery in output to pre-pandemic levels," Jones wrote.

Meanwhile, the rate of input price inflation accelerated in July, as shortages of raw materials and unfavourable exchange rate movements pushed imported costs higher. This resulted in the second-fastest price increase since March 2019.

Still, the "firms were conscious not to dissuade clients from making purchases during challenging demand conditions," IHS Markit noted, which kept the input inflation from translating into a rise in selling prices.