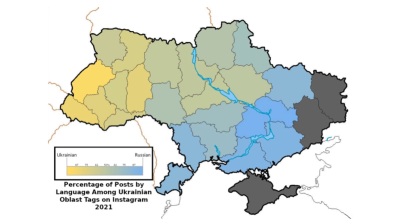 Russian is the social-media language of choice for Ukrainians / wiki
By Dominic Culverwell in Berlin January 19, 2022

Data collected on Instagram shows that 50% of Ukrainian users post in Russian, 46% in Ukrainian, and 4% in English, researcher Sven Etienne Peterson Tweeted on January 14. 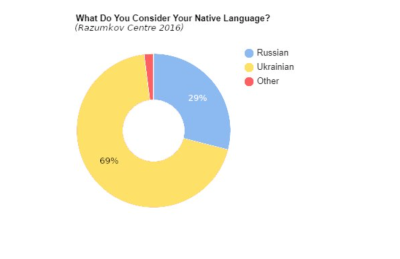 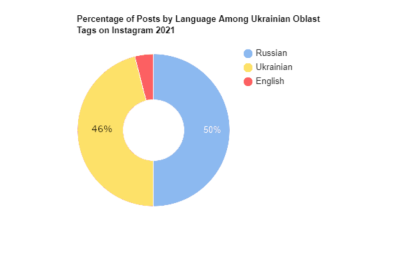 Language laws since 2019 have been pushing for the wider adoption of Ukrainian as the state language in a bid to distance the country from Russia after the annexation of Crimea and conflict in Donbas.

Although the results of Peterson’s analysis reflect the regional language divide, he noted that his data “contrasted with other surveys about the ‘native language’ of Ukrainians, demonstrating a far higher use of Russian.” 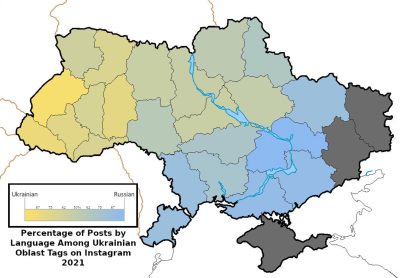 “My data more closely resembled pre-2014 voting patterns, such as the 2010 presidential election. This probably indicates Ukrainians are using Russian (+ getting information from Russian language sources) at much greater levels than what they claim as their native language”, Peterson stated.

Language has been a topic of controversy in Ukraine. The Verkhovna Rada passed the latest language law on 16 January, stating that all Ukrainian newspapers and magazines must switch to Ukrainian. Minority languages such as Crimean Tatar as well as official EU languages such as English are exempt. However, Russian is not among those exceptions.

Critics of the language laws believe they could exacerbate friction between the Russian and Ukrainian speaking communities.