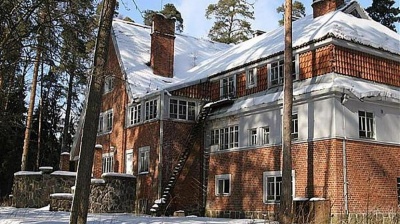 Russian petrochemical giant Sibur has been accused of renting the luxury Villa Sellgren in the Gulf of Finland for the personal use of President Vladimir Putin. / wiki
By Ben Aris in Berlin June 22, 2022

Leaked emails from Russia’s top petrochemical company Sibur show that the company rented a luxury villa in the Gulf of Finland that has been used by Russian President Vladimir Putin as a holiday getaway, claims a new investigation by the Organised Crime and Corruption Reporting Project (OCCRP). Sibur denied the allegations in exclusive comments to bne IntelliNews.

Sibur rented the villa for a reported $1mn a year, but did not use it and the emails show that some top-level Sibur executives had no idea why they were spending money on the property they had been barred from using by the villa’s management company, according to OCCRP.

The house is known as Villa Sellgren and liberal opposition TV channel Dozhd reported in 2016 that it had become a vacation destination for Putin. Those claims were corroborated by an investigation by anti-corruption activist Alexei Navalny, who also linked the villa to Sibur, pointing out that a banner near the villa’s entrance identified it as the “Sibur retreat” that was there until 2017. OCCRP claims that the email leak provides new evidence linking Putin to the villa.

Sibur leased the villa in 2012 from its owner, Oleg Rudnov, an old friend of Putin, through a property management company called Nogata, OCCRP reports. A Sibur spokesman denied that there were any close relations between Rudnov and the company, saying the only ties between them were that they were both shareholders in the Zenit Football club, along with many other shareholders.

But when the management asked the Nogota for permission to visit the villa, it was refused, leading to a flurry of internal emails, some of which were leaked to OCCRP. Some of the senior executives remained mystified by the arrangement and asked for clarification, the emails show.

Nogata actually belongs to Nikolai Shamalov, the father of Sibur executive board member Kirill Shamalov, who famously married Putin’s daughter. The son was initially hired to work in 2008 at Sibur in government relations, but has since expanded his portfolio as bne IntelliNews reported in a profile of Shamalov. At the time, one of Shamalov’s duties was being in charge of corporate events and counterparty relations management amongst other things, a Sibur spokesman clarified to bne IntelliNews.

“We would like to stress that Mr Shamalov was not a member of the board of directors of Sibur Holding in 2013. He was elected as a director on 26 December, 2014 at the extraordinary meeting of shareholders of the company,” the spokesperson told bne IntelliNews, stressing that Shamalov had only joined the board after Sibur was no longer leasing the villa. Shamalov was one of many senior executives that quit after Russia started its “special military operations” in Ukraine, leaving on March 25.

Shamalov’s father is a co-owner of Rossiya Bank (dubbed “Putin’s bank” due to its many ties to the Kremlin) and a former economic advisor to the Russian government. He is also a close friend of Putin’s, OCCRP claims.

The management of the villa changed in June 2013 when a Nogata representative wrote to Sibur explaining that a new management company would take over running the property, and that Sibur’s lease must be terminated within ten days, OCCRP reports.

OCCRP reports the new management company was being run by Pavel Zaitsev, also an employee of Bank Rossiya. Zaitsev is also linked to LLCInvest.ru, which a separate OCCRP investigation found was linked to over 80 companies worth more than $4.5bn that includes many people from Russia’s elite.

However, Konov flatly denies that any talks took place with Zaitsev and points out that a there were more than lease agreement in a succession, but all agreements came to an end in 2013.

“That agreement was not for 2012-2014, but for November 2012-July 2013, and the purpose of the lease was corporate events (top management seminars, team-building activities, etc.). It is unclear to us why the facility is referred to as a “villa”, because it was not a piece of residential housing, but rather a set of buildings intended for these kinds of corporate events,” a spokesman for Sibur informed bne IntelliNews via emailed comments. The spokesman said that Sibur regularly did large off-site trips with its executives and mentioned as an example partially renting the Courtyard by Marriott hotel in central Moscow for one night for an event that had around 100 company participants, as well as trips to Minsk, Beijing, Hamburg and others with several dozen participants.

A Sibur representative contacted by OCCRP dismissed the allegations and also described the company’s arrangement as a “sublet” that gave it only “limited, non-exclusive access to the property between 2012 and 2013.” Indirectly, Sibur’s former chairman of the management board CEO Dmitry Konov told OCCRP the idea Sibur would carry out the president’s personal wishes was “absurd.”

“This an absurd and completely inaccurate assumption. In my entire career with the company (from 2004 to 2021), I can only recall several meetings with Mr Putin that I attended. These were industry conventions, production launch events and one or two industry development meetings in Kremlin, which were all publicly announced. We cannot call these events meetings in a traditional sense of the word because they were not one-on-one, save for a meeting that took place in May 2010. It was recorded and the transcript is publicly available,” Konov told bne IntelliNews via emailed comments.

A company spokesman expanded on the terms of the sublease to bne IntelliNews, saying that the company has non-exclusive use of the villa and that the management company was free to sublet it to other clients.

“The owners were free to lease the premises to third-party events for periods that had not been previously booked by Sibur and had no obligation to inform the company accordingly,” the spokesperson told bne IntelliNews.

Konov added, via emailed comments, that Sibur was active in training its staff and running off-site team building events, spending “millions of rubles a year” on rent. But in the case of the Villa Sellgren, “Sibur neither financed the construction, nor ordered any features or specs of the property. We only paid a fixed amount for a period, during which we could negotiate pre-determined dates and the format of our events. We used similar properties in other geographies which members of the management board discussed and chose for the sake of diversity.”

The villa is in Russia’s northern Leningrad region and was conveniently located close to Sibur’s headquarters, which until 2014 were in St Petersburg. However, Konov went on to say that the villa had not lived up to its billing and there were problems and it was “uncomfortable”, which meant the company terminated its lease early in 2014.

In a separate response OCCRP cited the company executive as saying that Sibur had not put up the sign outside the villa, reported by Navalny, and that its layout and formatting did not match Sibur’s standard branding. “That’s an out-of-date logo and the company’s legal form is wrong. We have never been an open joint stock company.”

EXPLAINER: how a price cap on Russian oil might work
3 hours ago
Russia catches a nasty dose of the Dutch Disease
5 hours ago
Sky-high inflation forces more Russians to take out “pay-day” loans
3 days ago
Death of China-to-Russia cargo transit routes means it’s all aboard for Kazakhstan
3 days ago
Armenia diaspora faces waning influence on Turkey, Azerbaijan negotiations
5 days ago