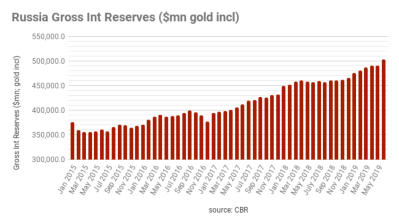 The foreign currency and gold reserves of the Central Bank of Russia (CBR) amounted to $502.7bn as of end of the week of June 14 --  the first time the Central Bank of Russia’s (CBR) gross international reserves (GIR) topped the $500bn mark since 2014, when the reserves where slashed from $510.5bn to $388bn by the need to support plummeting ruble rate, the regulator reported on June 13.

Reserves gained $7.5bn in the reporting week, due to a positive revaluation of the foreign currency component and regular purchases of Fx as part of the "budget rule" sterilising extra oil revenues, the CBR said in a statement.

As reported by bne IntelliNews, the macro stability of the first quarter of 2019 has allowed the CBR to return to its informal target of building up GIRs to over $500bn after flip flopping on the issue earlier this year.

The $500bn target was set by the CBR in 2015, as the currency market stabilised after the extreme volatility of 2014, and was repeated by Nabiullina until the spring of 2018. But in September 2018 along with front-loading the key interest rate by 25bp to 7.5% the CBR halted purchases of foreign currency on the currency market as ruble came under increased pressure from possible toughening of sanctions.

Bloomberg claimed back in 2015 that setting a FX/gold target of $500bn was a direct “recommendation” by President Vladimir Putin, who has long been following a “fiscal fortress” policy of high reserves and low external debt, but has been resisted by the central bankers.

In the meantime the structure of GIR changed, as the CBR has boosted its gold reserves and cut the share of US dollar in its currency holdings. In 2018 the CBR bought a record-high 274.3 tonnes of gold, bringing its share in GIR to about 19% and accounting for 42% of gold purchases of all central banks last year.

The regulator now holds 2,133 tonnes of gold, making it the fifth largest gold reserve in the world. At the same time the share of US dollar was cut from 43.7% to about 20%.