Russia’s economic growth continues to surprise on the upside with 10.3% expansion in 2Q21 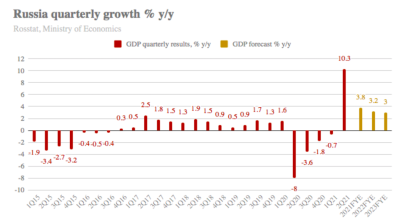 Russia's economy grew by 10.3% in the second quarter, slightly behind the rate of growth last year, but still strong. Economic growth is expected to slow in the second half of the year as Russians use up their excess savings and tourism restarts. / bne IntelliNews
By bne IntelliNews August 17, 2021

Russia’s economy put in faster than expected growth in the second quarter of this year, posting 10.3% y/y, according to preliminary data released by Rosstat on August 17.

Russia’s GDP was up 1.3% vs. 4Q19, although it is still 3 percentage points below pre-COVID-19 trend levels. Previously the Central Bank of Russia (CBR) said that the economy had caught up with its pre-COVID levels in the first half of this year after growing 4.6% in the first six months of the year.

The estimate is based on the production approach, which uses data from large and mid-sized enterprises in the non-financial sector.

According to Rosstat, which disclosed no additional details, the 2Q21 GDP estimate was largely influenced by the rebound in almost all industries, with manufacturing up 11.4% y/y, construction up 10.7% y/y and mining and quarrying up 7.8% y/y, Sova Capital reported.

“The results appeared to be better than we expected, and we will be able to single out the best performing sectors once more details are available on 10 September (i.e. the first estimate with a production breakdown). We believe that financial services could have performed well, as it saw an acceleration in credit dynamics in anticipation of the tapering of the subsidided mortgage programme. We also expect a better performance from services related to tourism, as most outbound tourist destinations (e.g. Turkey and Egypt) were closed,” the bank added.

As the economy passes the contraction gap caused by the lockdowns last years, most analysts and the CBR expect the momentum to ease in in the second half of this year.

Consumer activity – currently the main economic driver, fuelled by excess savings, a lack of outbound tourism and the growth of real income – should normalize as Russians use up their excess savings and as outbound tourism restarts, especially to Turkey and Egypt. Finally, the tapering of the subsidised mortgage program and a tighter monetary policy should offset elevated consumption and credit demand, Sova Capital predicts.

“Support for consumption should come from stronger incomes, which still have room to improve vs. pre-COVID-19 levels (disposable incomes are still 0.8% below 2Q19). We also expect a further recovery in the energy sector amid OPEC+’s easing of production constraints and greater activity in the services sector as the third wave of COVID-19 fades,” Sova Capital said.