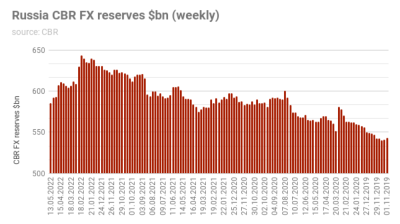 Russia’s CBR reserves down $43.7bn since the start of the war, but thanks to soaring oil prices the country is making a profit from its war with Ukraine. / bne IntelliNews
By bne IntelliNews May 20, 2022

The sanctions imposed on the Central Bank of Russia’s gross international reserves (GIR) on February 27 saw more than $300bn of its reserves held in Europe frozen in an unprecedented move as the West punished Russia for its invasion of Ukraine. However, technically that money still belongs to Russia and is counted as part of the latter's reserves.

The war in Ukraine has gone on much longer than expected and is costing some $300mn a day, according to the latest estimates by Russia’s Ministry of Finance.

Although Russia is spending heavily on the war, this has been more than compensated by the windfall gains the country is earning from sky-high commodity prices, which should replenish its reserves.

Russia’s current account surplus more than tripled in the first four months of the year to $95.8bn, the central bank said, as prices surged for its oil and gas exports and imports plunged under the weight of sanctions, up from $27.5bn in the same period a year earlier.

Defence spending has increased every month since President Vladimir Putin sent troops into Ukraine in late February as Russia’s Armed Forces failed to secure a quick victory and settled for a strategy of capturing eastern territories.

If Russia’s defence spending in February totalled RUB369bn ($5.4bn), March saw an uptick to RUB450bn ($6.6bn), according to the ministry data first reported by The Moscow Times’ Russian service.

Defence spending in April was more than double the pre-war period of RUB628bn ($9.2bn) spent on defence, or RUB21bn ($308mn) per day. Between January and the end of April 2022, RUB1.681 trillion ($24.6bn) of the Russian budget was allocated toward military expenditure.

Ukraine has been clear that it needs more weapons from the West. So, what’s the holdup?
White House doubles number of long-range rocket launchers sent to Ukraine in fresh aid package
bneGREEN: Coal investment remains major threat to green dream