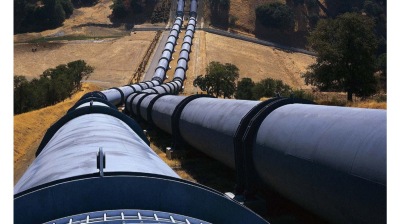 Russia has continued to export gas to Europe via Ukraine as per its transit deal despite the war, but those supplies have been disrupted for the first time after the Gas Transit System Operator of Ukraine lost control of a key pumping station. / wiki
By bne IntelliNews May 11, 2022

Part of Russian natural gas transit flows to Europe via Ukraine were halted due to the war on May 11, sending European gas prices spiking.

Gas entering Ukraine via the Sokhranivka gas metering station were halted at 7am local time, reports Bloomberg, after the territory that the station stands on fell under Russian military control. The Gas Transmission System Operator of Ukraine (GTSOU) said late on May 10 that it would turn the station off, as it no longer controls the station.

As bne IntelliNews reported, despite the war raging in the country, the gas transit business has continued unabated and indeed Gazprom has been exporting the maximum allowed volumes via Ukraine – and paying Kyiv its transit fees under the terms of the deal signed in December 2019 – as Europe races to refill its storage tanks ahead of the coming winter. Russia has taken control of some of the territory where pumping stations are located, but has been careful not to destroy the pipelines or interfere in the transit business.

There is a cluster of pumping stations around the Donbas region, where many of the Russian gas pipelines enter into Ukrainian territory.

While there have been calls for an immediate embargo on Russian gas sales to Europe by many countries, saying that European gas importers are funding President Vladimir Putin’s war machine, the irony is that Russia is sticking to the terms of its transit deal and continues to pay Ukraine for gas transit to Europe and is itself funding the Ukrainian war machine.

Gas prices have quadrupled from average pre-war levels, according to reports, and prices rose a further 6.8% on the news, Bloomberg reports. Benchmark gas prices traded 2.9% higher at €101.68 per MWh by 8:11 a.m. in Amsterdam on May 11.

Russia’s state-owned gas giant Gazprom declined a proposal by GTSOU to switch the transit route to an alternative entry point at Sudzha, the newswire reports.

The shutting down of the Sokhranivka pumping station is the first serious disruption of Russia’s gas transit business via Ukraine since the war started on February 24.

Russian gas had been flowing via both entry points normally despite the conflict, although most of the time at lower rates than the transit deal envisaged.

Sokhranivka (Sokhranovka in Russian) handles about a third of Russian gas flows entering Ukraine. The rest passes through the Sudzha station, which is further away from the occupied territories in eastern Ukraine.

GTSOU said the Russian military presence in the region was making it impossible to fulfil its obligations to transit gas via the pumping station. GTSOU said it was closing the station due to a force majeure and would not be liable for the stoppage. Russia’s gas transit deal with Ukraine is a take-or-pay arrangement that means even if Russia passes less gas through Ukraine’s system than it has contractually paid for it still has to pay for the full contracted volumes.

A Gazprom spokesman confirmed it had received notice from Ukraine, but it didn’t receive confirmation of force majeure, Bloomberg reports.

The amount of gas set to transit via Sudzha on May 11 was 72mn cubic metres, higher than for the day before, but still well below the average for both stations combined the same day, according to GTSOU. Flows via Ukraine to Slovakia’s Velke Kapusany, the main transit route to Europe, are also set to fall by 18%, to their lowest since April 30 based on grid data, Bloomberg reports.