Russia finished 2020 with a milder than expected 3.1% contraction 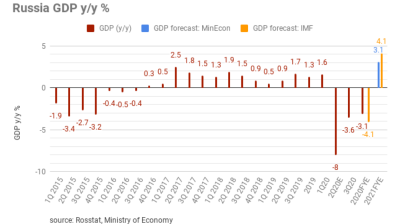 Russia finished 2020 with a milder than expected 3.1% contraction, according to preliminary data from the Economics Ministry released on February 1.

Russia suffered a smaller contraction than most major economies in 2020 after the government opted not to re-impose a lockdown in the second half of the year.

“The data from Rosstat came as a surprise: we were forecasting a decline of 3.6% y/y while government and consensus were even more negative with estimates of 3.8-3.9% y/y. We believe that comparisons to previously released statistics (in 9M20 GDP contracted by 3.4% y/y) are not that relevant, as the agency has most probably revised its earlier estimates due to a shift to a new price base for calculations. This also explains the smaller decline in GDP due to the lower share of the O&G sector in Russia’s gross product,” BSC Global Markets chief economist Vladimir Tikhomirov  said in a note.

The contraction was softer than had been expected by economists, who forecast a 3.7% drop in a Bloomberg survey. The Economy Ministry had projected a decrease of 3.9%, the Central Bank of Russia (CBR) between 4% and 6% and the International Monetary Fund (IMF) -4.1%. Investment banks were more upbeat, with BCS Global Markets forecasting a contraction of -2.7 and Renaissance Capital -2.5%.

Public catering and hospitality services saw the steepest decline last year (-24.1% y/y), which is hardly surprising given the quarantine restrictions and lockdowns. Other laggards included households, culture and sports, the resource sector and retail trade – output of the latter was far from dramatic at -2.9% y/y.

Most of the economic hit came in the first half, when the government imposed a strict lockdown and global oil demand slumped due to travel restrictions.

The summer saw a rapid rebound after the lockdown restrictions were lifted, driven largely by surging consumption. However, in September as the second wave of the coronavirus (COVID-19) epidemic made itself felt, growth slowed again as many Russians chose to self-isolate voluntarily.

Russia’s 2020 contraction is set to be about half that of the euro area economy, which is forecast to shrink 7.3%, reports Bloomberg.

The price of oil, Russia’s main export earner, has risen by more than 40% since the beginning of November and the economy is forecast to grow about 3% in 2021, according to another Bloomberg survey.

“1Q21 will be the last quarter when the Russian economy will display a negative y/y dynamic. Starting from April, macro trends will shift to positive following the change in the base factor. We forecast that the economy will grow by 3.3% y/y in 2021; however, given the recent changes in the composition of GDP, it is likely that our growth estimate might prove to be too conservative,” Tikhomirov added.