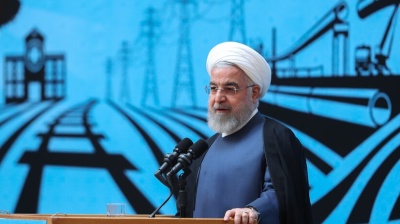 Rouhani on August 27 attended the inauguration ceremony for the National Action on Housing Construction Scheme in Tehran.
By bne IntelliNews August 27, 2019

A day after indicating Iran might lower its conditions for a nuclear deal meeting with Donald Trump, Iranian President Hassan Rouhani on August 27 backpedalled and returned to Tehran’s previous position that the US must lift sanctions on the Islamic Republic if it wants to negotiate.

Iranian Foreign Minister Mohammad Javad Zarif, meanwhile, on a visit to China and Japan, said that “a meeting between Iran’s president and Trump is unimaginable”.

As the weekend G7 concluded in Biarritz, France, Trump not only said he could meet with Rouhani if the circumstances were right, he showed some openness to the idea of allowing Tehran to use some of its oil wealth to access credit.

But that does not seem to have softened attitudes in Tehran to the idea of meeting with an American president who is seen as inflicting a crushing “economic war” on Iranians.

“If someone wants to have their photo taken with Hassan Rouhani, it’s not possible; it’s possible to do it with Photoshop,” he added.

Rouhani would need approval from Supreme Leader Ayatollah Khamenei to enter talks with Trump. He has not yet given his reaction to the standpoint taken by Trump at the G7.

Zarif, who paid a surprise visit to Biarritz to meet French President Emmanuel Macron and French officials on the sidelines of the summit, threw doubt on whether European attempts at mediation to resolve Tehran’s standoff with the Trump administration could make headway.

“Unfortunately Europeans need some permits from the US to take measures and fulfil their [nuclear deal] commitments,” Zarif said in comments reported by state-run IRNA news agency. “This situation where independent countries need to obtain permits from other countries for taking legal measures does not offer a suitable prospect for the future of international relations.”

Trump withdrew the US from the 2015 nuclear deal in May 2018, saying it was not tough enough. The accord is supposed to protect Iran from heavy sanctions as long as it meets conditions to keep its nuclear program civilian. Iran was described by UN inspectors as in full compliance with the nuclear agreement when Trump nevertheless pulled out of it and switched to a sanctions policy.

Trump is using sanctions to throttle the Iranian economy, with the aim of forcing Iran to negotiate a more demanding nuclear deal that would not only introduce more curbs against the country’s nuclear development programme, but place restrictions on its ballistic missile programme and put an end to Iran’s heavy backing of militias in the Middle East that variously oppose Israel and Arab allies of Washington.

Iran has started moving towards the nuclear deal exit door and has warned Europe that unless measures to protect its economy—particularly its lifeline oil exports which the US is attempting to drive to zero—are put in place, Tehran’s withdrawal from the accord is ahead.

In his latest comments, Rouhani reiterated that seeking nuclear bomb weapons was banned under a fatwa issued by Ali Khamenei in the early 2000s. “We have never wanted nuclear weapons because of our supreme leader’s fatwa,” said Rouhani.

Trump and Rouhani are both due to attend the United Nations General Assembly in New York in September.