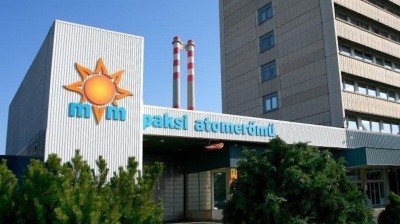 The Paks nuclear plant accounted for half of the electricity generated in Hungary
By Tamas Szilagyi in Budapest February 6, 2020

The four blocks of the nuclear plant, each with 500MW, accounted for nearly half of the gross electricity generated in the country.

Paks continued to function as the main pillar of carbon-free electricity production in Hungary in 2019, MVM said, adding that record production came with very strong safety track record. There were no events rated 1 or higher on the 7-level International Nuclear Event Scale (INES) scale. There were 10 minor incidents, rated at zero on the INES scale, which was the lowest number ever.

Of the 33.08 TWh of electricity generated in Hungary, gas-fuelled power plants made up 26.6%, while power plants fuelled with coal, lignite or other fuel generated 11.7% of the total.

Renewable energy power plants accounted for 12.4% of the electricity generated. Plants fuelled with biomass made up 5.6% of the total, solar parks generated 2.8% and wind farms 2.2%.

Hungary's new energy strategy released last month relies on nuclear and renewable energy. At present 60% of Hungarian electricity generation is carbon-neutral and the government is striving to increase that ratio to 90% by 2030 relying on nuclear and solar power.

Preparations are underway to construct another two blocks at the Paks nuclear plant. Russia's Rosatom was selected to build two 1,200Mw reactors in Paks at a cost of €12.5bn. Construction was to start in 2017, but a protracted European Commission probe and lengthy examinations by local authorities concerning safety delayed the project by several years.

Based on the intergovernmental agreement signed in January 2014 by Russian President Vladimir Putin and Hungarian Prime Minister Viktor Orban, the new blocks should have started production in 2026-2027, but the realistic date is around 2030 or later. The Hungarian authorities had yet to give the final permit for the project.

The government says the project is essential to guarantee the security of supply for Hungary's energy needs, as two blocks at the nuclear power plant with a combined 1,000MW capacity will reach maturity by the early 2030s and will be phased out.

According to the 2030 energy strategy, the country's final energy in ten years' time will not exceed its 2005 level of 785PJ.

The share of renewable energy within the country's final energy utilisation will grow to a minimum of 21% by 2030 from 14%.

"Westlessness" dominates the discussion at the Munich Security Conference