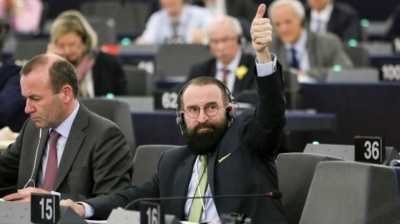 Fidesz founder Jozsef Szajer to step back from politics after 30 years.
By Tamas Szilagyi in Budapest November 30, 2020

Chairman of the Fidesz European Parliament delegation, Jozsef Szajer announced on November 29 that he will retire from political life as of January 1 after 30 years. This comes just days after the resignation of Peter Gottfried, chief foreign policy advisor of PM Viktor Orban.

The departure of the two moderate conservatives is a blow to the prime minister, who is in a fierce battle with European leaders after vetoing the EU budget and recovery fund.

Szajer, one of the founding fathers of the ruling Fidesz party, has been an MEP since 2004, the year Hungary joined the EU. Before that he worked as an MP for 14 years since the regime change in 1990. The 59-year-old said he submitted his resignation on Sunday to David Sassoli, President of the European Parliament. He said his decision was not connected to the "fierce political fight that is taking place on the European stage". Participating in the daily political struggle had been "an increasing mental strain”, he added.

The legal expert of Fidesz was mulling his retirement before the 2019 European Parliament elections.

Local media did not go into speculation about his departure. However, there is consensus that it comes at a critical time when Hungary's illiberal strongman Orban is engaged in a major escalation of conflict with the EU and his own fraction in the European Parliament, the European People's Party (EPP).

The retirement of one of the most prominent figures of the Fidesz is a big blow to his party and Orban personally.

Szajer was responsible for writing Hungary's new constitution in the spring of 2011. The writers of the Fundamental Law intended to create a constitution "carved in granite", however, it has seen nine amendments in nine years, which reflected the change of the ruling party's political agenda.

The latest amendment would ban the adoption of children by same-sex and LGBTQ couples, and single people could only adopt with special permission from the minister in charge of family affairs.

Hungary's overhaul of its basic law also made headlines, but in another way. Szajer admitted that it was drafted on no other device than his Apple iPad.

"Steve Jobs will surely be happy when he gets word that Hungary’s new constitution is being written on an iPad, actually my iPad," he wrote at the time in a post, while praising Apple's new product.

As chairman of the Fidesz European Parliament delegation, he was also in charge of the contact between his party and the EPP,  which suspended the membership of the Hungarian conservative party in March 2019. The dark cloud of being excluded from the largest fraction of the European Parliament still hangs over Fidesz.

Manfred Weber, the group’s leader in the European Parliament, recently said had there been no epidemic, the assembly of the EPP would have already decided about the exclusion of Orban's party. Fidesz has vocal allies in the group from leaders like Slovenia’s PM Janez Jansa, but the Italian and French delegations also back Orban.

Szajer's wife is Tunde Hando, another influential figure in the System. She is head of the National Office of the Judiciary (OBH). Hando, a political appointee and a friend of Orban, was selected to run the judiciary in 2011 when Fidesz overhauled Hungary’s court system.