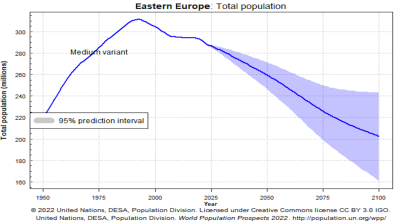 The latest UN population projections show the decline in Eastern Europe's population will continue throughout this century. / UN
By Clare Nuttall in Glasgow August 12, 2022

Population decline across almost all of emerging Europe will result in the populations of many countries dropping to levels not seen since the early 20th century.

UN data shows that the total population of the post-socialist countries in Central, Southeast and Eastern Europe, the South Caucasus and Central Asia will drop from 418mn in 2021 to an expected 362mn by the end of the century, according to the median projection in the World Population Prospects 2022 report.

Taking out the countries of Central Asia — the only region where countries have rapidly growing populations — the slump is even deeper, from 339mn to 231mn, or a decline of 32%, according to bne IntelliNews calculations.

For the emerging Europe region excluding Central Asia, the population will fall below 249mn — the 2050 level — in 2084.

Bulgaria’s population is thus forecast to drop to the level it was at around 1880, following the re-establishment of the Bulgarian state after the Russo-Turkish War of 1877-1878.

For Albania the level was similar to that around the start of the Second World War, when the last king of Albania, Zog I, fled into exile after Italy’s invasion in 1939.

Serbia’s population is also expected to fall to levels last seen in the early 20th century.

Ukraine is the fourth country expected to lose more than half of its population by 2100, with a projected decline of 53%.

Latvia, Croatia, Bosnia, Lithuania, Kosovo, Armenia, North Macedonia and Poland are all expected to lose between 40% and 50% of their populations by the end of the century.

Russia’s population is expected to be less severe than many other states in emerging Europe because of immigration from poorer ex-soviet states. However, the region’s most populated country by far is still expected to see a population decline from 145mn in 2021 to just 114mn by 2100.

Emerging Europe is experiencing the steepest population decline globally, according to the UN report. “Among countries with at least half a million people, the largest relative reductions in population size until 2050, with losses of 20 per cent or more, are expected to occur in Bulgaria, Latvia, Lithuania, Serbia and Ukraine,” it says.

This is due to a combination of the sharp falls in life expectancy and birth rates after the collapse of communism plus mass emigration.

“The slow recovery in life expectancy at birth in the countries of the former Soviet Union explains the large and continuing differences across European countries. In 2021, life expectancy at birth ranged from less than 70 years in the Republic of Moldova and the Russian Federation to 84 years in Switzerland.” This continues to have negative consequences for the region, which is characterised by tight labour markets, a brain drain and ageing populations, which act as constraints on economic growth.

It remains unclear to what extent immigration may make up for this. As well as Russia, the richer countries in Central and Southeast Europe, notably Slovenia and Czechia, are experiencing inward migration that is balancing natural population decline.

There have been efforts to recruit from as far afield as Africa and Southeast Asia to tackle labour shortages. Some of the Ukrainian refugees that fled to the eastern EU member states may become permanent immigrants, though this depends on when and how the war ends.

On the other hand, there is fast population growth in Central Asia, where birth rates are considerably higher than in the rest of Emerging Europe. As previously reported by bne IntelliNews this will result in Central Asian countries overtaking their Central, Eastern and Southeast European peers this century.

Other states from the region also have fast growth rates, with their populations not expected to peak until the latter years of the century; both Kyrgyzstan’s and Tajikistan’s are projected to still be growing by 2100.

This brings its own problem as the governments will need to ensure they can feed and provide energy to their growing populations in a region where climate change is already a serious problem.

These countries aside, the rest of the region with its steady population decline contrasts with the global forecast of population growth for much of this century.

The UN reports that population growth is caused in part by declining levels of mortality, with life expectancy reaching 72.8 years in 2019, up by almost nine years since 1990.

Geographically, more than half of the projected increase in global population up to 2050 will be concentrated in just eight countries: the Democratic Republic of the Congo, Egypt, Ethiopia, India, Nigeria, Pakistan, the Philippines and Tanzania.

Like Kyrgyzstan and Tajikistan, the countries of sub-Saharan Africa are expected to continue growing until the end of the century. Sub-Saharan Africa will contribute more than half of the global population increase expected by 2050.

bneGREEN: Fit for 55 – not fit for purpose
BRUEGEL: National policies to shield consumers from rising energy prices
Croatia’s PM to fire INA managers if they refuse to resign over corruption scandal