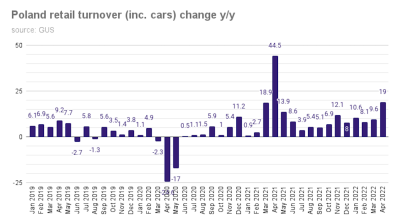 Polish retail sales grew 19% y/y at constant prices in April, the growth rate nearly doubling versus a gain of 9.6% y/y the preceding month, the statistics office GUS said on May 23.

The low base effect from April 2021, Easter spending, and Ukrainian war refugees drove the April jump, analysts say. At the same time, the seasonally adjusted m/m retail sales dropped 0.8% for the first time since December in an early sign of consumer spending easing after the jolt of the war-driven refugee influx but also due to inflation eating into household incomes.

“We expect that in the coming months, household spending on goods will grow at a slower pace y/y, due to very high inflation, diminishing real value of savings, and rising interest rates that will limit the possibility of credit financing,” Bank Millennium said in a comment on GUS figures.

Still, April alone marks the economy’s solid start in the second quarter. The consensus remains for full-year economic growth to land clearly above 4% even if a more pronounced slowdown materialises in May and June.

Seven out of eight main retail segments posted y/y turnover gains at constant prices in April, GUS showed in the breakdown of the data.

Of key segments, sales of textiles, clothing, and shoes grew fastest, ballooning 121.4% y/y in the fourth month, likely because of refugees’ spending money for essentials as they strived to settle in their temporary homeland.

Sales of fuels gained 11% y/y, while turnover in the pharmaceutical segment increased 18.9% y/y.

Food sales grew 11.9% y/y – another effect of refugee influx but also of Easter spending. Sales of furniture, audio and video equipment, and domestic appliances added 27.9% on the year.

Car and car parts sales were the only retail segment to suffer a contraction, declining 11.2% y/y.

Retail sales and other high-frequency data do not change much in the outlook for interest rates in Poland. The National Bank of Poland (NBP) is all but certain to deliver yet another hike in June, with the market expecting an increase of at least 75bp to bring the reference rate to 6%.

More tightening is still very much certain in the coming months, as inflation is expected to persist in double digits, peaking at 15% or even 20%, analysts say.