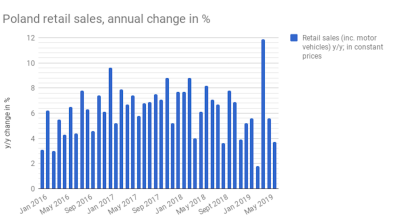 The reading marks a pick-up of 2pp in retail turnover growth in comparison to y/y expansion recorded in June. While below market expectations, the expansion in July is in line with Poles’ increased consumer spending that is driven by the good situation on the labour market, low unemployment and growing wages in particular.

“While the growth dynamics of retail sales remains solid overall, the trend has slowed. In the months to come, however, the second round of fiscal stimulus should support growth of retail sales and private consumption,” Erste wrote in a comment to the release.

Poland’s GDP growth came in at 5.1% y/y in 2018, the fastest expansion in over a decade. The economy also expanded unadjusted 4.4% y/y (4.1% y/y upon adjustment) in the second quarter in a show of resilience amidst the worsening of the external environment.