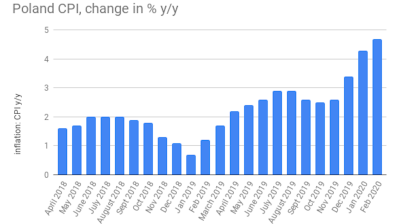 Polish CPI expanded 4.7% y/y in February, the annual growth rate adding 0.3pp to the January reading, the statistical office GUS said in a preliminary estimate on March 13. Inflation was thus at its most severe since November 2011.

Inflation likely peaked in February and the CPI will now begin its descent, as the radically altered macroeconomic environment in the aftermath of the coronavirus pandemic will take hold.

Poland’s Monetary Policy Council, which has kept interest rates at a record low of 1.5% for over five years now, is expected to consider a rate cut as early as next month in an attempt to help prop up the economy.

Poland instituted a partial shutdown this weekend in order to contain the spread of the highly contagious virus. That could dent growth rates even to levels of a technical recession, some analysts say.

Because of the extraordinary circumstances, the February reading bears little relevance for the future, Bank Millennium claims.

Broken down by key segments, prices grew 7.5% y/y in the most-weighted segment of food and non-alcoholic drinks. That is the same rate as the revised annual expansion in January.

Prices in the second most-weighted segment, housing, increased 7.3% y/y in February, a jump of 1.1pp versus the preceding month. Prices of tobacco and alcohol products expanded 4.1% y/y, adding 1.5pp.

Transport prices added 1.4% on the year, 0.7pp below the y/y reading in January.

In monthly terms, CPI expanded 0.7% in February after growing 0.9% m/m the preceding month.

“As of March, CPI should subside, and decrease even further in April as the pandemic spreads. The [coronavirus] may cause some short term rise of prices, but the disinflationary impact should prevail, especially in case of oil prices,” ING said.

Some necessities like canned food, hygiene products and medication may become more expensive, as households stockpile them, but their weight in the CPI basket is just 8%, ING predicts.

“On the other hand, weak demand should prevail and result in substantially lower prices in leisure and hospitality, recreation etc. and overall prices due to weak demand. Above categories also constitute about 8% of the CPI basket. The most disinflationary factor should be lower prices of some durable goods, such as automobiles,” ING said.

Also, the collapse of oil prices should deduct from the CPI, it is expected.

Industrial production in Ukraine tumbles by 16.2% year on year in April
3 hours ago
Polish retail sales come down crashing in April, hit by COVID-19 lockdown
14 hours ago
70% of companies in Czech Republic saw a drop in orders in May due to COVID-19 outbreak
2 days ago
Poland’s industrial production records unprecedented fall in April in the wake of COVID-19 lockdown
3 days ago
Poland’s PPI deepens fall to -1.3% y/y in April
3 days ago