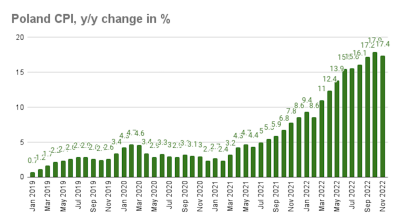 The reading eased 0.5pp compared to October’s growth, the first y/y easing of the index since June 2021 (excluding February, when the government anti-inflation measures took effect). The CPI  came in at 0.6pp below the consensus line. But price growth is expected to renew in 2023 on the back of the return of standard VAT rates for electricity, heat, fuels, and natural gas, which were lowered in line with the government’s anti-inflation measures.

“We assume that inflation will peak in the first quarter of 2023,” Bank Millennium said in a comment.

Analysts say that the CPI should gradually decline during 2023, supported by the effect of a high reference base, but also by the improving situation in supply chains and lower pressure on commodity prices, including energy prices.

“Nevertheless, in our opinion, CPI inflation in 2023 will remain in double digits, and the pace of disinflation is subject to high uncertainty,” Bank Millennium noted.

The November inflation reading greatly reduces the dilemma of the National Bank of Poland (NBP) on whether to apply more monetary tightening to fight price growth at a time when economic growth is slowing down markedly.

The NBP paused rate hikes in November, keeping the reference interest rate unchanged at 6.75%. The CPI and the GDP readings – the latter also published on November 30 – both make further tightening ever less likely.

The increase in the inflation rate in November came on the back of growth in all major components, GUS showed in the breakdown of the data.  Food prices grew 22.3% y/y in November, the flash estimate said – a pick up against a gain of 21.9% y/y in October.

In monthly terms, the CPI increased 0.7% in November, slowing down by 1.1pp versus October’s monthly reading.